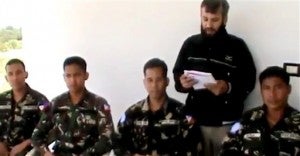 In this image taken from video obtained from the Ugarit News, which has been authenticated based on its contents and other AP reporting, a man reads a statement as four abducted Filipino UN peacekeepers are seen in Daraa, Syria, on Thursday, May 9, 2013. AP

“They have been released. They are now in the custody of the commander of the Philippine battalion in the Golan Heights,” Brigadier General Domingo Tutaan told AFP.

According to Zagala, the four Filipino peacekeepers are already in the custody of the commander of the Philippine Battalion Lieutenant Colonel Nolie Anquillano.

They will be brought to Camp Ziuoani from Position 86 for medical checkup and stress debriefing, Zagala said.

The AFP also thanked the United Nations Disengagement Observer Force for doing its best to secure the safe release of its soldiers.

The Filipino members of a United Nations peacekeeping force were taken by Syrian rebels on Tuesday in the tense ceasefire zone between Syria and Israel.

Manila had called on the Security Council to exert all efforts to ensure their safe release, and warned it may withdraw its contingent of 340 troops permanently if the UN could not adequately protect them.

In March, 21 Filipino soldiers were abducted by the same group and held for four days.

“They are fine, but as a matter of procedure they will have to undergo stress debriefing and a medical check-up,” Tutaan said of the four soldiers.

“We are happy that this has been resolved and the soldiers have been released and seemingly unharmed,” he added. 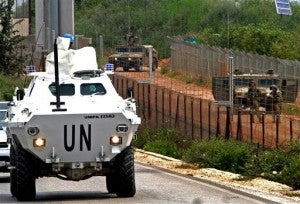 The UN Disengagement Observer Force (UNDOF) has been monitoring a ceasefire in the Golan Heights between Israel and Syria since 1974.

The ceasefire zone has become increasingly dangerous because of the two-year-old Syrian civil war, which has cost more than 70,000 lives.

Syrian government forces and rebels are fighting inside the area. Shells from the Syrian side have been hitting Israeli-held territory and Israel’s military has been firing back.

Foreign Secretary Albert del Rosario on Friday told reporters the Philippines may soon pull out of UNDOF entirely because of the mounting security concerns.

“The people that abducted our peacekeepers were actually under siege and they are using our people to get themselves out of the situation they find themselves in. That thing is not for us,” del Rosario said.

“We don’t want to expose our people any further, any more than we need to,” he said.

The Syrian rebel group, which calls itself the “Yarmuk Martyrs’ Brigade”, had said it was holding the four peacekeepers “for their own safety”.

UNDOF numbers about 1,000 peacekeepers and civilian staff from Austria, India, Morocco, Moldova and the Philippines. With a report from Nikko Dizon, PDI