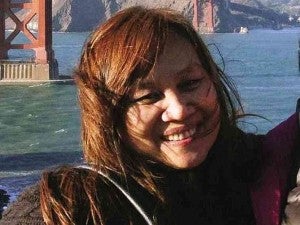 Nida Arjona Tapel, 52, of San Miguel, Catanduanes, received the award from District Attorney Jackie Lacey, who cited the Filipino caregiver “for her presence of mind, bravery and heroic act” in thwarting the crime.

According to a press statement announcing the award at a lunch hosted by the Rotary Club of  Los Angeles (LA5) on April 12, 2013: “On December 19, 2011, Ms. Tapel, a caregiver for a 95-year-old woman with Alzheimer’s disease, risked her life in an effort to prevent the kidnapping of her elderly client in West Los Angeles. The perpetrator of the crime was the elderly woman’s daughter, who was barred by court order from having unsupervised contact with her mother.

“The daughter arrived at her mother’s home and tried to take the mother away. When Ms. Tapel tried to stop her, the daughter pushed Ms. Tapel and doused her with pepper spray. The daughter tried to drive her mother away in an SUV, but Ms. Tapel (after signalling a neighbor to call 911) got into the vehicle to protect her client. When police arrived, the daughter sped away, leading police on a chase for several miles before surrendering. The defendant pleaded no contest to charges of attempted kidnapping, battery and evading an officer.”

Nida, who has been working in the United States for five years now as a teacher and a part time home care provider, accepted her award with three other brave LA residents who helped thwart crimes. They included two men who came to the aid of a 77-year-old woman who was battered and robbed by a gang member and a bus driver who pulled a badly injured woman out of a burning car after her angry ex-boyfriend ran her car off the road.

The District Attorney’s Courageous Citizen Award, according to its official web site, was “created to commend those individuals who have acted with courage and at considerable personal risk to help a victim of crime, assisted in the capture of a suspect, or testified in the face of extraordinary pressures.”

The LA County District Attorney hailed Tapel and the other awardees “who have taken extraordinary steps to assist others when they were most vulnerable. They stopped a crime. They made sure that a criminal was prosecuted. They helped a crime victim during a terrifying moment of need. They are vital to the pursuit of justice and our community is a safer place because of them.”

“I felt happy because, as a Catandunganon, I was able to show to America that even if we come from a small province, we do have big hearts to help others,” said Nida in an interview.

Nida credits her “resolute faith” for being able to do what she did that day.

Prayer is the  only weapon

“As an OFW, my only weapon is prayer. God has made me strong, because it is really very hard to be in a foreign land. There are plenty of challenges along the way, so embrace God tightly.”

She acknowledges the nurturing she got from her aunt, Dr. Cleofe Buen Reyes, for her resilient spirit. “I was raised by my aunt to call God all the time.”

Tapel said she dedicates her award to her fellow Catandunganons and to the Filipinos as a whole. “Let us show to the world that our purpose in life is to help others, not to hurt them.  We only live once in this earth; let us make it significant. Let us not be afraid of death for God will be always there for us.”

Courage comes with humility, she added. She remembered her teachers at the Catanduanes State Colleges (now CSU) who always reminded students of the value of humility.

“The school taught me to be humble—the higher you get, the more humble you must be.  “Saan mang sulok ng mundo tayo mapadpad, alalahanin natin na dapat ang ating mga paa ay sa lupa pa din nakatapak. (Whatever corner of the world we may find ourselves, we must always remember to keep our feet on the ground).”