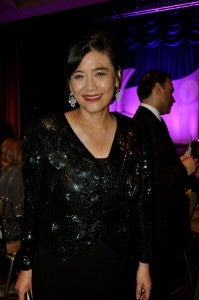 WASHINGTON, D.C.–“I come to you as Filipino, as gay, as undocumented, as American. And my being gay, my being undocumented, my being Filipino: these are facts and not political plot points to be debated.”

Define American founder Jose Antonio Vargas uttered this frank statement as he received the “Community Leadership Award” May 8 in Washington, D.C. to resounding applause from government and Asian community leaders.

A champion of undocumented immigrants, Vargas was given the award to mark Asian American and Pacific Islander Heritage Month. The 19th gala awards dinner is an annual celebration of the Asian Pacific American Institute for Congressional Studies. Vice President Joe Biden keynoted the event.

U.S. Representative Mike Honda (D-CA) spoke highly of Vargas, calling the immigration activist a hero and telling those who don’t support him to “grow up!”

“It’s about time that we recognized somebody like Jose Vargas,” he told the INQUIRER.net. “He’s an icon, he’s a hero, he’s a man that stands up for what he believes in. He’s talented. He would not be in the people’s eyes if he did not stand up for himself and come out and do what is an American move: to be honest and to let everybody know who

he is and for that we are stronger and better for it. He’s given a lot of people a lot of courage because of his own courage.” 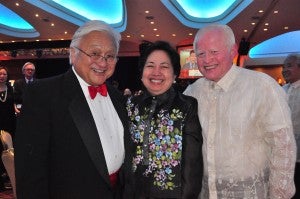 U.S. Representative Judy Chu (D-CA) said she was “so glad to hear the Vice President talk about issues that are so important to us like his stands on family visas for immigration reform, on the DREAM Act students, on the pathway to citizenship, all those things that we feel really strongly about.”

She praised Vargas “as such an effective spokesperson for why we need comprehensive immigration reform. He’s so moving when he speaks because he talks from a personal perspective having been undocumented himself. He’s the most worthy recipient.”

Vargas delivered his heartfelt and compelling remarks saying, “I am not a leader and I am not courageous, I am not brave, all I did after years of hiding and lying was tell the truth about who I am.

“Accepting this award is honoring my lolo, a security guard, and lola, a food server in a banquet like this.

“Here’s what’s really get interesting, while I’m up here getting awards and standing in front of you, people, (undocumented) workers fear for their lives, students fear for their future and I accept this hope in honor of them.” 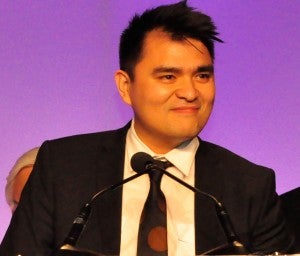 Jason Chung, national communications director of the Republican National Committee of the Asian Americans & Pacific Islanders, said, “Vargas’ story compels us to review our immigration policy and it’s part of the process of immigration reform.”

White House Executive Chef Cristeta Comerford recalled the time when she was first interviewed by media. “Jose and I go way, way back,” she said. “When I became the chef, Jose was actually the first reporter to come to our house. He was with the Washington Post at the time. He actually camped outside of our house overnight.

So the gala was almost like a reunion for both of them, she says. “It is really an amazing story and I’m just touched by his humility. He tells me he just wanna keep grounded and keeps thinking about his parents. He’s an amazing person and it gets me emotional talking about him. I’m very happy for him.”

Jose Cuisia, Jr., Philippine Ambassador to the United States, stated: “We are very proud that Jose Vargas has been granted this award. I think this is a recognition of his courage in coming out despite the risks that he was taking being an undocumented alien.”

Cuisia added that Vargas can claim credit for being “one of to remind the U.S. Congress and the administration to come out with “a more comprehensive immigration reform bill that would benefit the 11.5 million undocumented immigrants of the United States.”

Cuisia further said that under the proposed bill, “for as long as the immigrants do not have a criminal record they will not be deported. There is a deferred deportation program and with the intent of pursuing the comprehensive immigration reform, I don’t think Jose should worry about being deported at this point.”

editor-in-chief of the Huffington Post Media Group said in an April interview at the TIME 100 Gala: “He’s brilliant and very brave with what he’s doing right now, helping a lot of people.”