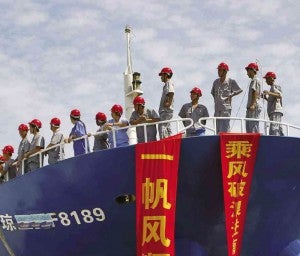 FISHING ARMADA This picture taken on May 6, 2013, shows the crew standing on a fishing vessel setting sail for the Spratly Islands from Danzhou in China’s Hainan province. AFP

BEIJING—China has sent one of its largest recorded fishing fleets to disputed islands in the South China Sea, state-run media said on Tuesday, amid tensions over Beijing’s assertion of its claims in the region.

The China Daily said that a flotilla, including 30 fishing vessels, set sail on Monday for the Spratly Islands, an archipelago disputed by China and five other claimants, including the Philippines, Vietnam, Taiwan, Malaysia and Brunei.

Asked about the report from Beijing, the spokesperson for the Department of Foreign Affairs (DFA), Assistant Secretary Raul Hernandez, said: “What is important is that these reports should have official confirmation from our monitoring agencies before we make a comment about them. We’ll see in the coming days how this will play out.”

“It is the mandate of the Coast Guard and Navy to make sure that we know what is happening in our maritime zones and if there is a need to act on them, they share the information with us,” Hernandez said at a press briefing.

The Philippines refers to the area it claims in the disputed region as the West Philippine Sea. Manila calls the main group of isles it claims as the Kalayaan Island Group and has established an administrative presence on an isle called Pag-Asa.

The fleet left China’s southern province of Hainan for a 40-day trip to the region, the report said, and includes two large transport and supply ships.

Chinese fishing boats regularly travel to the Spratlys but the fleet dispatched on Monday was as large as one described as the biggest ever launched from the province when it set off last year.

China will make “every effort to guarantee the fleet’s safety,” the report quoted an official from the department of ocean and fisheries as saying.

China and neighboring countries have long used fishing fleets and maritime patrols to assert their territorial claims, and have upgraded their naval forces in recent years as tensions over claims in the West Philippine Sea have risen.

The Philippines and Vietnam have complained that China is becoming increasingly aggressive in its actions in the area—such as harassing fishermen—and also through bullying diplomatic tactics.

The waters around the Spratlys are rich in fishing resources and it is believed they could hold large oil and gas reserves.

The Chinese deployment comes amid progress in the Philippines’ arbitration bid against China before the United Nations to stop similar incursions into established Philippine maritime boundaries.

The International Tribunal on the Law of Sea has completed appointing arbiters to a five-member panel that would handle the case, in line with a procedure under the United Nations Convention on the Law of the Sea (Unclos).

The DFA earlier expressed optimism that the panel would take jurisdiction of the case and start tackling the merits by July. Results of the legal process are “final and unappealable,” Foreign Secretary Albert del Rosario has said.

In Washington, the US Departments of State and Defense and the National Security Council “reiterated their strong support” for the Philippine decision to take China before the arbitral tribunal, Foreign Undersecretary for Policy Evan Garcia said.

Garcia said US officials reaffirmed their support during meetings in the US capital last week.

“Once more, officials from the State and Defense Departments, as well as the NSC, made clear that the US backs our resort to arbitration proceedings under Unclos to peacefully resolve the disputes in the West Philippine Sea,” Garcia said of his May 3 meetings.