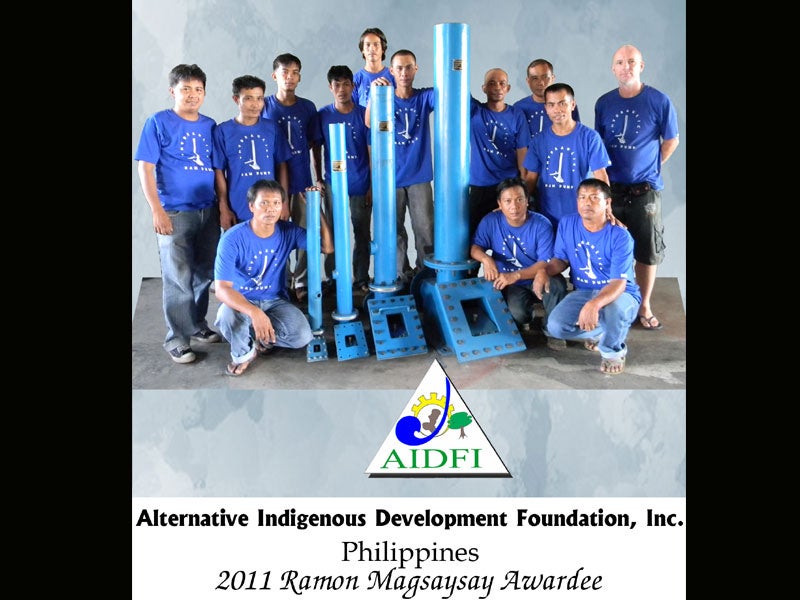 MANILA, Philippines—An Indian engineer, a Philippine charity group and an Indonesian social worker are among the winners of Asia’s Ramon Magsaysay Award this year for giving green technologies to the poor, organizers said.

Award foundation president Carmencita Abella said the trio had helped harness the technologies to empower their countrymen and worked to create waves of progressive change across Asia.

The award, often described as Asia’s Nobel Prize, is named after former president Ramon Magsaysay,  who died in a 1957 plane crash.

It aims to honor people who address issues of human development in Asia with courage and creativity.

One of the 2011 winners was US-trained Indian engineer Harish Hande, 44, for bringing solar lights to a country where half of all households have no electricity, the awards foundation said.

His Solar Electric Light Co.-India has tapped the sun’s energy to light up 120,000 households and is now one of the country’s largest solar technology providers.

Indonesian social worker Tri Mumpuni, 46, was recognized after her IBEKA foundation built 60 small power plants harnessing the energy of water stored in dams to bring electricity to half a million people, the awards foundation said.

She was once kidnapped with her husband by former separatist rebels in Aceh province while pursuing her non-governmental group’s project to bring electricity to rural Indonesia.

Re-engineered for upland farms, the pump gave the communities clean, cheap water for household use and for raising livestock, fish, and small farms, it said.

A ram pump, which does not need an external power source, harnesses the force of a large body of moving water to pump a small amount of water uphill.

Each year six people or organizations are named joint winners of the Magsaysay award.

This year the other winners were a man who set up an Islamic school for girls in Indonesia, a lender to India’s poorest, and a man working to restore democracy in Cambodia after the Khmer Rouge murdered his father.

The winners are to receive their awards in Manila on August 31.

Below are the awardees:

Alternative Indigenous Development Foundation, Inc. (AIDFI), from the Philippines. The organization is being recognized for “their collective vision, technological innovations, and partnership practices to make appropriate technologies improve the lives and livelihoods of the rural poor in upland Philippine communities and elsewhere in Asia.”

Harish Hande, from India. He is being recognized for “his passionate and pragmatic efforts to put solar power technology in the hands of the poor, through a social enterprise that brings customized, affordable, and sustainable electricity to India’s vast rural populace, encouraging the poor to become asset creators.”

Hasanain Juaini, from Indonesia. He is being recognized for “his holistic, community-based approach to pesantren education in Indonesia, creatively promoting values of gender equality, religious harmony, environmental preservation, individual achievement, and civic engagement among young students and their communities.”

Koul Panha, from Cambodia. He is being recognized for “his determined and courageous leadership of the sustained campaign to build an enlightened, organized and vigilant citizenry who will ensure fair and free elections — as well as demand accountable governance by their elected officials – in Cambodia’s nascent democracy.”

Nileema Mishra, from India. She is being recognized for “her purpose-driven zeal to work tirelessly with villagers in Maharashtra, India, organizing them to successfully address both their aspirations and their adversities through collective action and heightened confidence in their potential to improve their own lives.”

Tri Mumpuni, from Indonesia. She is being recognized for “her determined and collaborative efforts to promote micro hydropower technology, catalyze needed policy changes, and ensure full community participation, in bringing electricity and the fruits of development to the rural areas of Indonesia.”

Established in 1957, the Ramon Magsaysay Award is Asia’s highest honor and is widely regarded as the region’s equivalent of the Nobel Prize. It celebrates the memory and leadership example of the third Philippine President, and is given every year to individuals or organizations in Asia who manifest the same sense of selfless service that ruled the life of the late and beloved Filipino leader.

“The Magsaysay awardees of 2011,” says RMAF President Carmencita T. Abella, “are five remarkable individuals and an exceptional organization, all deeply involved in harnessing technologies—both hard and “soft”– that can genuinely empower their countrymen and create waves of progressive change in Asia. Working on critical issues that impact not only their respective countries, but indeed, all of Asia, they are showing how commitment, competence, and collaborative leadership can truly transform individual lives and galvanize community action.

“Their concerns are clearly quite diverse – affordable electricity, political reform, inclusive education, economic empowerment, access to water. But there is one thing these Magsaysay laureates share: a greatness of spirit which infuses their leadership for change. They all build collaboration and seek consensus wherever possible. They all refuse to give up, despite adversity and opposition,” Abella said.

The six 2011 Magsaysay awardees join 284 other laureates who have received Asia’s highest honor to date.

This year’s Magsaysay Award winners will each receive a certificate, a medallion bearing the likeness of the late President, and a cash prize. They will be formally conferred the Magsaysay Award during the Presentation Ceremonies to be held on August 31, 2011 at the Cultural Center of the Philippines.