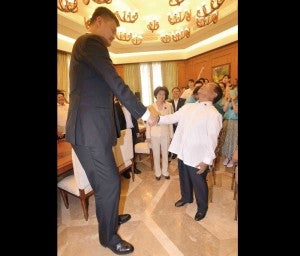 He may be no Black Mamba like Kobe Bryant, but Vice President Jejomar Binay unabashedly dribbled around Yao Ming, as if challenging the 7’6” former Houston Rockets center to a one-on-one.

A shocked Binay welcomed Yao and his Shanghai Sharks to his Coconut Palace Monday morning, gaping at the giant and looking up to shake hands with the retired NBA player.

The 5-foot vice president stood just up to Yao’s elbow and quipped to photographers he needed a ladder to face the towering Chinese.

Yao and the Sharks, assisted by Chinese Ambassador to the Philippines Ma Keqing and officials of the Philippine Sports Commission, paid a courtesy call on Binay and invited him to watch their match in the evening against Smart Gilas Pilipinas.

“I think I will stop campaigning just to watch this game. Politics is also a popular sport here in the Philippines,” Binay told Yao.

Taking a break at the homestretch of the campaign for next week’s elections, a helicopter ferried Binay from Camarines Sur to meet Yao.

“The visit of Mr. Yao Ming is part of the continuing cultural exchange between the Philippines and China. We hope we can have more of this cultural exchange,” Binay said at the conference room.

Yao thanked Binay for the warm welcome he and his team received in the past few days and hoped basketball could lead to closer ties between Manila and Beijing.

“Basketball is a very popular sport here in the Philippines. In the last 20 to 30 years, basketball has gained very much popularity in China too. Everybody watches this game and we hope to further exchange our friendly relations through this game,” Yao said through an interpreter.

He then presented Binay with a Sharks jersey and a basketball signed by the team members. Binay bounced the ball a few times, à la Kobe Bryant, teasing Yao.

“This is the result of our bilateral agreement for us to share expertise, our athletes in training. This is just the beginning of many more teams visiting the Philippines. We’re talking of the football team, volleyball team,” Garcia said.

“It is our belief that through sports, we can be one, China and the Philippines, and maybe we should forget some of our political problems,” said Garcia in apparent reference to the maritime dispute between Manila and Beijing over the West Philippine Sea (South China Sea).

Binay said he talked briefly with Ma about the dispute. “I told her that China should avoid actions that provoked tensions in the area… that [Chinese] vessels should not enter where these should not,” he said.

“I told her that if we could resolve those issues [through dialogue], then arbitration would no longer be necessary,” Binay said.

He said Ma reiterated China’s rejection of the Philippines arbitration bid in the United Nations, a legal action that Manila initiated in January to clarify its maritime entitlement.