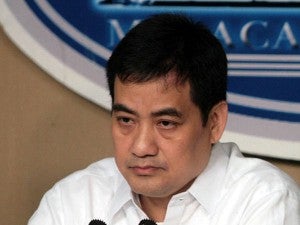 MANILA, Philippines—Malacañang is not elated by reports that the country remains the third worst place for journalists.

“We will continue our efforts to stop the impunity against journalists, the extralegal killings,” presidential spokesperson Edwin Lacierda told a briefing in the Palace.

“We saw the news that the Philippines is still third. But, again, let me also explain also that when we look into each particular incident, we look into the motives also,” said Lacierda.

He said some were “politically motivated killings,” while other “extralegal killings for the journalists” were due to other reasons.

Communications Secretary Herminio Coloma blamed the continuing stigma on the country’s “culture of impunity” which, he said, was “significantly” due to the Maguindanao massacre in 2009 in which 31 journalists were killed.

Coloma, head of the Presidential Communications Operations Office, noted that a total of 39 media persons were killed in the country from 2001 to 2011.

“Hence, it is evident that the Philippines has achieved major gains in removing the culture of impunity in the period following the Maguindanao massacre,” said Coloma.

Under the Aquino administration, the Philippine National Police has reported that of the eight cases involving media practitioners from July 2010 to December 2011, “it was determined that six of the eight incidents have either turned out to be unrelated to the victims’ media practice,” he said.