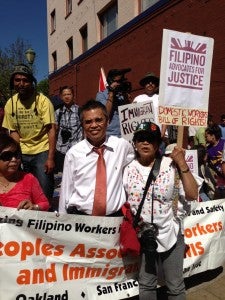 Filipinos were among the May Day marchers in Oakland. (Photo by Rose Paquette)

In San Francisco, some 1,000 people marched from the heavily Latino Mission District to the Civic Center Plaza in front of City Hall shouting loud slogans calling for justice for immigrants.

The largest May Day march in the Bay Area took place in San Jose, the heart of Silicon Valley. By late afternoon, crowds reached up to about 10,000. Union members, youth and community advocates, children, elders and religious gathered at Our Lady of Guadalupe church, carrying banners and placards. Chants, rants and noisemakers punctuated their demands along the four-mile hike. It took almost an hour and a half to reach City Hall.

Mara Ibarra of the Pilipino Association of Workers and Immigrants’ said they were demanding a stop to deportation, the reunification of families, immediate legalization and pathway to citizenship and “equal labor rights for all.”

Guadalupe’s pastor, Fr. Jon Pedigo, speaking at City Hall, made a practical call:  “To be involved and engaged in our neighborhood, to get connected so nobody leaves (this event) without signing up (for petitions to representatives and community leaders) and to be ready for more actions in June (like lobbying) if the Senate still refuses to sign.”

Both Fr. Pedigo and Ibarra told INQUIRER.net that they wanted to give voice to “people, not corporate needs.” She was referring to the provision expediting H1-B visas, while the main provision still does not shorten the wait for family members who are not agricultural workers or students. Fr. Pedigo remarked, “It would take a century for your siblings from the Philippines to come to the US.”

Workers in Oakland march and rally demanded a higher minimum wage, while other groups carried placards calling for justice for immigrants. Among them were Filipino Advocates4Justice, Migrante Northern California, the National Alliance For Filipino Concerns and Bagong Alyansang Makabayan USA. 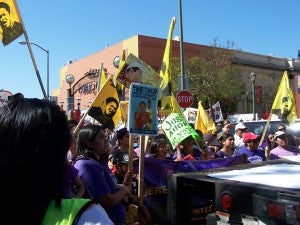 Latino, Asian and African protesters marched on International Boulevard to the Fruitvale BART station plaza in Oakland, many decrying what they see as the deficiencies in the proposed immigration reform legislation. Muslim women in black chadors marched carrying banners in Spanish.

“We’re very disappointed in the Senate Bill,” said Justice4Filipinos executive director Lillian Galedo at the Oakland march. “We don’t feel many (immigrants) will benefit because there are too many requirements for obtaining citizenship–fees, fines, language requirement, long waits and the knowledge of history.”

At least 11 million undocumented immigrants will be affected by the final bipartisan bill in Congress once it is enacted into law.

Nationwide, there are an estimated one million undocumented Filipinos with a quarter of a million reportedly concentrated in California, according to a demographic survey by Peter Chua, author and professor at San Jose State University.

Galedo deemed as inappropriate the $5-billion government funding for more fences on theU.S. borders. “It’s a total waste of resources. It always resulted on deaths on the borders,” she said.

Analyzing the Senate Immigration Reform Bill, known as the Border Security, Economic Opportunity and Modernization Act of 2013 (S.744), the National Immigration Law Center, stated that given the tremendous amount of resources already earmarked for border security, “there is no justification for delaying the processing of people in RPI (Registered Provisional Immigrant) status…nor should lawful permanent residence (LPR) be conditioned on the implementation of the program that are rife with problems. “

The NILC expressed concern over the use of employers with electronic verification (E-Verify) system, because the databases upon which E-Verify relies allegedly contain inaccuracies that deprive authorized workers of jobs. 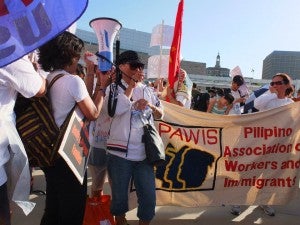 Members of Pawis prepare to march in San Jose.

Besides, the NILC said employers have misused E-Verify, and the mandated use of such (E-Verify) is likely to result in discrimination against immigrant workers.

Moreover, it will impose new costs on employers, and it will make workers even more vulnerable and drive many deeper into the underground economy, the NILC said.

Galedo said the real players in the ongoing congressional debate “are the lobbyists, contractors and employers benefit from the immigration bill.”

Jun Cruz, a Nafcon member, said the group is calling on Congress “to prioritize protecting workers and keeping families together and not the big business and profits.” Cruz said the bill is limited to only those who entered the U.S. as of December 31, 2011. “The problem of those who came after that date is not addressed and will result in mass deportation.”

Bayan USA chairman Berna Ellorin called for an end to deportations legalization “for all (undocumented immigrants).” Ellorin said the bill introduced by the Gang of Eight would expand the guest-worker program without strengthening worker protections.