4 Filipinos among 6 released by Somali pirates 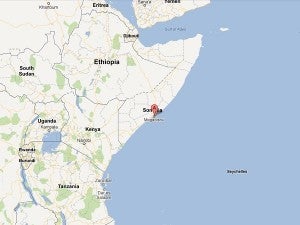 COPENHAGEN, Denmark—Two Danes and four Filipinos who were held hostage in Somalia for more than two years after their ship was attacked by pirates were released on Tuesday, the Danish government said.

Foreign Minister Villy Soevndal says the six men were safe aboard a Danish Navy frigate off Somalia, but gave no further details.

The crewmen were on the Danish cargo ship M/V Leopard when it was attacked on Jan. 12, 2011, off the Somali coast. They were believed to have been held hostage on the mainland.

“For more than two years, ruthless criminals have kept them prisoner,” Prime Minister Helle Thorning-Schmidt said. “Today, we are pleased that the six seamen have gotten their freedom back.”

She denied that Denmark had paid a ransom.

Defense Minister Nick Haekkerup told reporters that Danish commandos were sent to Somalia to pick up the hostages and escorted them out to the Danish frigate. It was unclear how they were released but Danish TV2 said the six men were freed by the hostage-takers after they had received a ransom.

Some of the hostages received medical assistance, including Soeren Lyngbjoern, who reportedly had been so ill for weeks that he was unable to stand up.