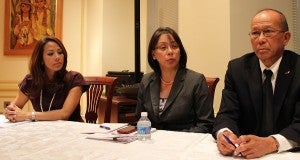 “There is an urgency this year to fix our broken immigration system, so we have to stay in this fight to make sure a fair, just and humane bill is enacted,” Bueno said. “Filipinos are directly affected by this, not just the Latinos, so we have to make our voices heard and be part of this national debate.”

A former White House special assistant on domestic affairs, deputy assistant secretary in the US Department of Health and Human Services, and legislative director in Senate and US House offices, Bueno has been in the trenches of policy-making for more than 20 years.

Bueno lauded the bill submitted by the bipartisan Gang of Eight, notably the provisions which would reduce family backlogs over a ten-year span, correctly reclassify spouses and minor children of legal permanent residents as immediate relatives, and allow parents sponsored by U.S. citizens to bring their minor children with them.

“The long backlogs currently force families to endure inhumane wait times,” she said. “These meaningful solutions will ensure that families are reunited as quickly as possible.”

But there are “fixes to certain parts of the bill that need to be made,” Bueno warned. Among them: the replacement of certain family-based visas, such as siblings, by a merit-based system.

“It’s no longer enough to just be a brother or sister of a U.S. citizen in order to come to this country,” she explained. “As proposed, your chances are enhanced if you win points for factors such as age, education, entrepreneurship, employment, English language ability, family ties to the U.S. and other criteria. But there are concerns that this point system will undermine family reunification in the long run.”

Filipino American leaders plan a series of town hall meetings, such as this one held at the Philippine Embassy recently, to educate the community about immigration reform and organize congressional visits. Photo by Jon Melegrito

During the Q&A that followed, one question related to LGBT or same-sex couples. “They are not recognized in the family definition,” Bueno said. “Reform must be inclusive and should not discriminate based on race, gender or sexual orientation.”

Another attendee asked about Filipino World War II veterans who have been waiting to reunite with their families. “This should not be a heavy lift because both houses already approved a bill before that would fast-track the visa application of family members,” Bueno replied.

While she expects the Filipino veterans amendment to be included in the main bill, she anticipates a tough battle ahead on the other fixes, especially since the U.S. House of representatives has still to weigh in.

“That is why we need to organize and mobilize our community, now!” declared Bing Branigin, a coordinator with Filipinos for Family Reunification. In her call to action, Branigin urged community leaders to be actively engaged throughout the legislative process.

Bueno’s presentation was the first of a series of educational forums planned by the Filipino American community here. The community has availed of her expertise and experience in organizing lobby efforts to impact the legislative process, notably in the campaign to win recognition and benefits for Filipino World War II veterans.

The community forum, dubbed “Talakayan sa Embahada,” (Town Hall Meeting at the Philippine Embassy), also addressed overseas voting as they relate to the coming senate elections in the Philippines, and the on-going certification process of Filipino World War II veterans who have filed claims under the 2009 Filipino Veterans Equity Compensation (FVEC) Act.

Maj. Gen. Delfin Lorenza, head of the Office of Veterans Affairs, reported that out of the 42,600 applicants only 18,764 veterans were granted benefits. About 4,000 have been denied because their names do not appear in the official certified list. Their appeals are pending.

The National Federation of Filipino American Associations (NaFFAA) and Filipinos for Family Reunification co-sponsored the event.