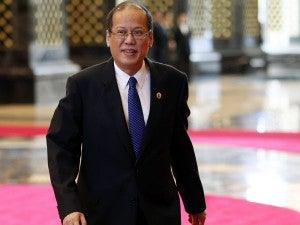 BANDAR SERI BEGAWAN, Brunei—President Benigno Aquino III said here Wednesday night he was not rushing the study of the Philippines’ complex claim to Sabah, arguing that any solution should be acceptable to all parties.

After the Association of Southeast Asian Nations summit opened here Wednesday night, the President indicated that the multi-disciplinary study of the claim by the Cabinet would take longer because of its sheer complexity.

Aquino ticked off several key dates and events—from the 19th century when the sultan of Borneo gave Sabah as a gift to the sultan of Sulu for helping to quell a rebellion until the mid-February 2013 Sabah “incursion’’ by heirs of the sultan of Sulu— that he said required further study.

“Of course we want to resolve the issue to everybody’s satisfaction,’’ he told reporters in a late-evening chat at the Philippine Embassy here. “We want to have a solution that makes everybody happy based on facts and just deliberation.’’

After violence erupted between Malaysian forces and followers of Jamalul Kiram III in March in Sabah, the President tasked key Cabinet officials to conduct a comprehensive study of the claim to Sabah.

And contrary to reports, Mr. Aquino said that studies on the legal, historical and diplomatic aspects of the study have yet to be completed.

“I’m still waiting for the results of the study,’’ he said.

The Philippines is not raising the Sabah issue during the two-day summit, which Malaysian Prime Minister Najib Razak skipped due to the ongoing campaign for the May 5 parliamentary elections in Malaysia.

“He has actually, I understand, excused himself because they are in the midst of a campaign. So I understand that he does not have time to discuss these matters. And we, also, by May 13, we’ll also have our own elections. So we have to attend to this very important concern first,’’ he said.

Aquino said both countries continued to enjoy good relations despite the Sabah conflict, and proof of this was the swift release of a boatload of Liberal Party candidates who were swept to Lahad Datu while en route to Turtle Island to campaign in mid-April.

“That won’t happen if you don’t have trust and good relations,’’ he said.

Rough seas swept the motorboat of LP mayoral candidate Rommel Matba and his 31 companions across the border at Taganak Island in Tawi-Tawi in mid-April. They were intercepted by Malaysian border police.

They were taken to a police station in Sandakan on suspicion they were reinforcements for the decimated forces of Kiram. Officials from the Department of Foreign Affairs made arrangements for their release. They were freed two days later.

Aquino admitted that the crisis, which has claimed over 70 lives and sent thousands of undocumented Filipinos fleeing Sabah, wasn’t over yet.

“Is it over? It’s not a hot issue right now,’’ he said. Several weeks ago, authorities declared that Kiram’s forces had been decimated.