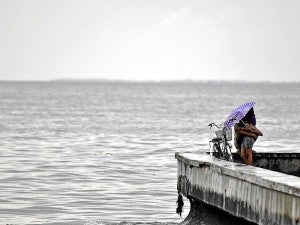 A couple hugs as they share one umbrella in Manila Bay. RICHARD REYES/INQUIRER

MANILA, Philippines—The long and short of it, gentlemen, is that it’s not the size or the frequency that matters, but the hardness of your manhood.

The latest Ideal Sex in Asia survey conducted by global market research firm, Harris Interactive Asia showed that eight in 10 Filipino men and seven in 10 women deemed erection hardness or the ability to maintain an erection as the most important factor for a optimum sexual experience.

The study was released on Wednesday by Pfizer, a US research-based drug company that brought to the market Viagra or popularly known as the “blue pill” to treat erectile dysfunction (ED).

The drug company has recommended the conduct of the study to provide a better understanding of “ideal sex” in a relationship and assess the impact of “suboptimal” erection to couples.

Of the respondents, 255 Filipinos—135 male, 120 female—participated in the study.

The same figure also agreed that men with “optimum erection” felt happier and more confident with themselves and had fewer sick days.

Women whose spouses achieve such erection also said they were also significantly happy and satisfied than those whose partners could not achieve optimal erection.

Less than a quarter of Asian men and women respondents also agreed that frequency of sexual intercourse is most important to achieve sexual pleasure and only one in three people or 38 percent of the male and 31 percent of female respondents deemed the extent of the deed as most significant.

Doctors present at the briefing explained on Wednesday that “optimum erection” or “Grade 4” Erection Hardness Score (EHS) could be likened to a cucumber while “suboptimum” erection or “Grade 3” EHS could be compared with an unpeeled banana.

The EHS Grades, based on the scale developed by the European Association of Urology, is used by physicians to assess the severity of erectile dysfunction among men, according to Dr. Juliano Panganiban, a urologic surgeon.

But more than achieving sexual satisfaction, an “optimum erection” has been considered an indication of a generally healthy condition among men, said Panganiban.

However, not all men are capable of reaching “Grade 4” erection because of some other health conditions, such as diabetes and cardio-vascular diseases, according to Dr. Anthony Leachon, Pfizer medical director.

“Because of macho mentality, a lot of Filipino men are suffering in silence from erectile dysfunction,” Leachon told the media.

He underscored the importance of men with ED seeking medical help as such condition “can be the start of something more serious.”

Earlier studies showed that 60 percent of male with erectile dysfunction were more likely to have diabetes or heart problems later on in life.