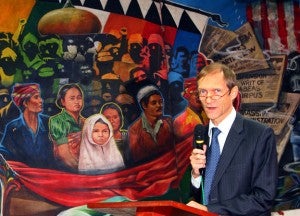 EU Ambassador Guy Ledoux: We are on a very positive curve. FILE PHOTO

MANILA, Philippines—Negotiations for the lifting of Europe’s blanket air ban against Philippine carriers are “on a very positive curve” as the European Union wants the issue resolved soon in hopes of bolstering trade and tourism with the Philippines, according to the EU ambassador here.

The resumption of the European flights of Philippine carriers is of mutual interest as it would facilitate greater business and people-to-people exchanges between the EU and the Philippines, EU Ambassador Guy Ledoux said Thursday.

“I think really we are on a very positive curve. I mean the first major achievement was the lifting of the safety concern by Icao (International Civil Aviation Organization) earlier this year,” Ledoux told reporters.

“I think what is important is that a very important dialogue has been reestablished,” he said.

Two days previously, transport officials from the European Commission met in Brussels with representatives from the Civil Aviation Authority of the Philippines (CAAP), Philippine Airlines (PAL) and Cebu Pacific to discuss the remedies that the Philippine side has implemented to bring airline safety measures at par with EU standards.

The Philippines passed the Icao’s safety audit in February, ending three years of being listed among the countries deemed of “significant safety concern” by the international aviation regulator.

The negative Icao assessment prompted the EU to ban Philippine carriers from flying to Europe in 2010.