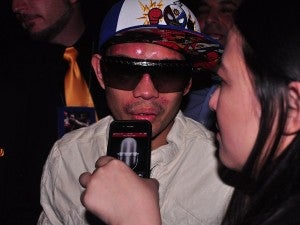 Dethroned Donaire talks to the press. Photo by Elton Lugay

NEW YORK CITY–Nonito Donaire, also known as the Filipino Flash, said he did his best.

He lost his WBO super bantamweight title to Guillermo Rigondeaux in a decision on April 14.

“I thought that he wasn’t better than me,” he told Inquirer.net. “I did my best. I thought I should have done something different but I didn’t.”

But Donaire’s “best” was not good enough for judge Jon Stewart and others on the panel, who decided in favor of his Cuban opponent.

The Donaire-Rigondeaux match had turned the legendary Radio City Music Hall–known for its Christmas musicals with the Rockettes’ shiny dancing legs–into an arena for brutal boxing and its loud, rowdy fans. In a quieter post-fight moment, Donaire reflected on his loss. 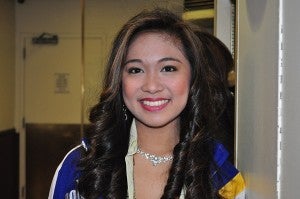 “I wanted to give an exciting fight for everybody, but you know he (Rigondeaux) was really a good fighter, so he deserves a congratulations from the judges,” Donaire conceded.

“I won’t say Rigo is a better fighter, but it’s always a match up stylistically. Rigo was landing better shots towards the middle rounds. At times, it was more like a stalemate, but in the end it was he who had control of the ring,” he said.

Fans booed the Cuban champ from the beginning of the fight. In the first few minutes of Round 10, Donaire knocked down Rigondeaux to applause from the unforgiving boxing enthusiasts. But referee Benjy Esteves ruled it a slip. 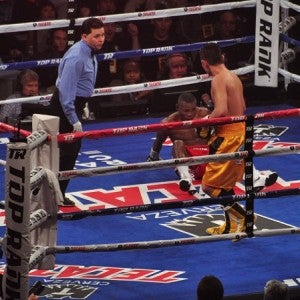 Donaire knocked down Rigondeaux in Round 10, but referee ruled it a slip. Photo by Elton Lugay

Donaire was clearly the crowd favorite. Crowd chants of “Nonito” began even before the first round. He threw punches all over the place, but they seldom landed on Rigondeaux’s face or stomach.

As a consequence, he lost much goodwill from his non-Filipino fans. He appeared aggressive and confident but disorganized, as he kept chasing his opponent all throughout the game.

Rigondeaux was fearless and focused. And when he found his opening, he delivered strong and consistent punches.

Donaire said, “As long as I did my best I can lift my head high knowing that I tried to make the fight happen. Without my aggressiveness, the fight would have been a terrible one.”

He added: “There’s nothing that he has that I don’t have.”