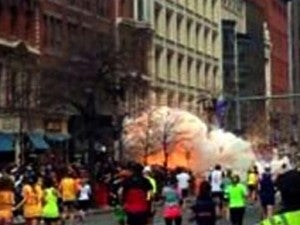 LOS ANGELES—At least 10 Filipinos and Filipino-Americans who ran the Boston Marathon on Tuesday are all accounted for, according to one of the participating Filipinos.

“We’re all OK,” triathlete and running coach Arland Macasieb said in a phone interview shortly after two bombs exploded near the finish line at the 117th Annual Boston Marathon, one of the most celebrated sporting events in the US city.

Macasieb, 37, said he finished the race roughly an  hour before the explosion.

He said the bombs exploded about 10 minutes after Filipino-American runner Rolan Ocampo reached the finish line.

Another runner, Susan Marie Sobrepeña, said she was close to the finish line when she heard the two blasts and was stopped by the police from moving forward.

“I feel quite lucky and blessed that my asthma held me back today from my usual faster pace,” she posted on Facebook. “Thank you to all for your concern and thoughts. I am keeping those hurt in the explosion in my prayers.”

As many as 15 Filipinos

The Philippine Consulate General in New York said in a statement that there were no Filipinos among the casualties reported so far—two dead and 138 injured as of press time. An 8-year-old child was one of the two who perished.

There were also six volunteer nurses from the New England Chapter of the Philippine Nurses Association who were stationed near the scene of the atack, Consul General Mario de Leon said in the statement. The nurses, led by Eden Gianan, are all safe, he said.

The marathon website listed 10 participants from the Philippines, according to the consulate.

Macasieb, however, said he counted at least 12 Filipino marathoners, but there could be more, perhaps 15.

“The ones I know personally, they’re all safe but the [DFA’s] list has names that I’m not aware of,” he said.

“It was an attack on humanity, not just on the US,” said Macasieb in an interview with Radyo Inquirer.

“The Boston Marathon is an international field wherein you’ve got the best runners from all over the world. They not only harmed the Americans,” he said.

Macasieb, who had already left the marathon when the explosion occurred, quoted Ocampo as saying that participants at first did not realize that the explosions were from bombs going off.

“Thank God I was already on a train going back to my friend’s apartment when the explosion happened. I only saw it on TV… [and the] explosion sounded like a big fireworks,” Macasieb said.

The Boston Marathon covers roughly 42 kilometers of open road, something thath made it “vulnerable” to such attacks, he said.

Not an attack on running

“You cannot secure 42 kilometers of open road. Security is as tight as it can be but it’s not like a stadium or a shopping mall where you can run people through metal detectors,” he said.

The New Jersey-based triathlete said he hoped the explosion will not deter runners from competing.

“It’s not an attack on running. I’m praying that it’s just one of those things that happen once. I hope this is the first and only time it happens,” said Macasieb.

“We shouldn’t live in fear… I hope this doesn’t deter people from running,” he said.

The Department of Foreign Affairs (DFA) on Tuesday called on Filipinos in Massachusetts to exercise heightened vigilance and stay away from large crowds in the meantime.

“We advise our kababayan in that area to be vigilant and avoid congregating in large crowds,” said DFA spokesman Assistant Secretary Raul Hernandez.

The Philippine consulate in New York said it continues to coordinate with Boston authorities and the Filipino-American community to make sure all Filipinos who were in the vicinity of the explosion are safe and accounted for, De Leon said.

He said the consulate had checked with four hospitals in Massachusetts, including the St. Elizabeth Medical Hospital, Boston University Medical, Massachusetts General and New England Medical Center, and found that no Filipino had been admitted to these hospitals for blast injuries.

He said the consulate had not received any report of Filipino casualties from the Filipino-American community.

In Manila, The Philippine National Police (PNP) on Tuesday said it was beefing up its intelligence monitoring of the Abu Sayyaf and other threat groups in the country in the wake of the Boston bombings.

Chief Supt. Generoso Cerbo Jr., PNP spokesman, said the PNP was doing its best “to ensure that this incident will not happen in our country.”

Cerbo said security authorities had not “monitored any specific and similar threat.”—With a report from Karen Boncocan, Inquirer.net; Radyo Inquirer

Read Next
Brunei Sultan, Aquino vow closer cooperation
EDITORS' PICK
Nograles: Cabinet members to donate 75% of monthly salary to aid COVID-19 fight
Quick chat with Nicole Andersson: ‘You really don’t need much to be happy’
IATF to LGUs: Issue ordinances vs attacks on frontliners, COVID-19 patients
Diokno to Duterte: OK to make fun of buck tooth, but focus on people’s needs first
Robredo spox thanks Duterte for defending VP’s efforts vs COVID-19
10 Filipinos positive for COVID-19 in UK, 7 in Ireland — envoy
MOST READ
Gov’t mulling quarantine period extension of 15-20 more days
Sotto on Isko Moreno’s call: We do our job without the media following our every move
ADB warns PH against prolonged lockdown
Cook more and eat less: Tips on your quarantine diet
Don't miss out on the latest news and information.