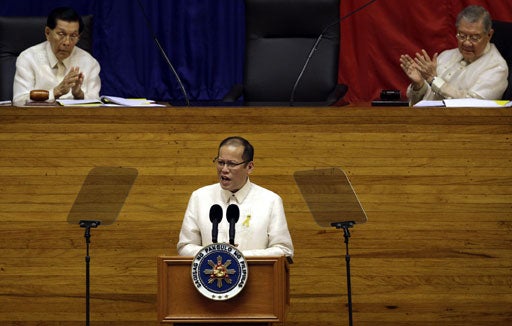 President Benigno Aquino is applauded by Senate President Juan Ponce Enrile, left, and Speaker Feliciano Belmonte during his State of the Nation Address at the House of Representatives on Monday. AP

MANILA, Philippines—President Benigno Aquino said the Philippines will upgrade its capability to defend its territory amid a deepening rift with China over the West Philippine Sea.

Aquino told a joint session of Congress in his annual “State of the Nation Address” that his government was sending a message to the world by upgrading its poorly equipped armed forces, including acquiring a new navy ship and weapons.

“We do not wish to increase tensions with anyone, but we must let the world know we are ready to protect what is ours,” Aquino said to a round of applause from politicians and invited guests.

Aquino said the Philippines would no longer allow other countries to enforce their will over territorial disputes.

“There was a time when we couldn’t appropriately respond to threats in our own backyard,” he said.

Recto Bank is the Philippine name for Reed Bank, a group of tiny islands in the West Philippine Sea, also known as South China Sea, that is claimed by the Philippines and China, while Recto Avenue is a major road in the heart of the capital, Manila.

The Philippines accused Chinese navy boats of harassing a Manila-commissioned oil exploration vessel near Reed Bank in March, one of the incidents that triggered a dramatic rise in bilateral tensions.

China, the Philippines, Vietnam, Malaysia, Brunei and Taiwan have overlapping claims to all or parts of the West Philippine Sea, which is believed to be extremely rich in oil and gas deposits.

Tensions in the decades-long dispute escalated this year amid accusations from the Philippines and Vietnam that China was becoming increasingly aggressive in staking its claims to the sea.

Aside from harassing the oil exploration vessel at Reed Bank, the Philippines accused Chinese forces of shooting at Filipino fishermen and placing markers on some of the islets.

The Philippines has one of the weakest military forces in the region, with its air force lacking any fighter aircraft and its navy made up mainly of World War II-vintage US ships.

However, the Philippines secured a promise from the United States in June for help in modernizing its armed forces, after appealing to its longtime ally for protection amid its rift with China.

A decommissioned US Coast Guard patrol vessel that will become the Philippines’ biggest navy ship is due to reach Philippine shores next month.

“At this very moment, our very first Hamilton Class Cutter is on its way to our shores,” he said.

“We may acquire more vessels in the future—these, in addition to helicopters and patrol crafts, and the weapons” Manila “will buy in bulk,” Aquino said.

The Philippines might elevate the West Philippine Sea issue to the United Nations, he said.

“We are studying the possibility of elevating the case on the West Philippine Sea to the International Tribunal for the Law of the Sea, to make certain that all involved nations approach the dispute with calm and forbearance,” said Aquino. Maila Ager, INQUIRER.net