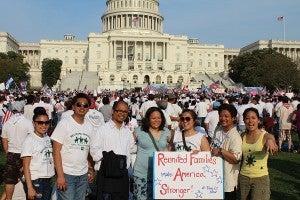 At the rally in front of the Capitol, speakers took turns in energizing the mostly Latino crowd with chants of  “Si, Si Puede!” (Yes, We Can!), Filipinos and Filipino Americans responded with their own rallying cry of  “Kaya Natin!” in solidarity with organizers’ demands that the path to citizenship must not be restricted and family visas protected and preserved.

But even as public excitement grew over a possible immigration overhaul, Asian American Pacific Islander (AAPI) advocacy groups expressed concern that the bill being crafted by a bipartisan group of eight senators would make it harder for relatives of U.S. citizens to immigrate to this country.

In her remarks during the rally, U.S. Rep Judy Chu (27th District of California) called for an end to “attacks” on family reunification provisions in immigration law. Congress, she said, must “legislate fair and just immigration reform while strengthening the family immigration system. Cutting down the cap on family-based visas will disproportionately impact the Asian community.”

Before the afternoon rally, immigrant rights activists and community leaders walked the halls of Congress to meet with their senators and U.S. representatives.

Valderrama noted that Filipino visa applicants face the longest waiting periods for legal immigration, up to 22 years in most cases. He appealed to both senators not to cave in to compromises that would divide families and set them apart from each other.

He argued: “That would undermine our cherished values of family unity. America benefits when immigrant families come together. They work hard, pay taxes, buy homes and start job-creating businesses.”

With so many loved ones overseas, Asian Americans rely on family sponsorships to keep their family units intact. Thus, although Asian Americans comprise almost six percent of the U.S. 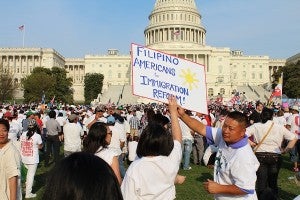 Students join demand for U.S. Congress to pass law granting path to citizenship for undocumented immigrants and the preservation of family visas.

population, they sponsored more than a third of all family-based immigrants. Nearly half of the family members in the visa backlogs are relatives of Asian Americans.”

With the U.S. Senate expected to begin debate on the reform measure soon as it is introduced next week, immigrant rights advocates vowed to continue their intensive lobby efforts through the month of June when both chambers are expected to vote on the bill.

“Our voices must be heard in this critical debate about an issue that affects not only our families and our community but the future of America,” says Lillian Galedo, executive director of Filipino Advocates for Justice.

Galedo led a delegation from San Francisco to lobby their U.S. representatives and senators.

“As we observe the anniversary of the emancipation proclamation [ending slavery], we are raising another cry for emancipation: full rights and equal protections for all undocumented immigrants,” she said.

“They need it now! All these people are already workers and productive members of U.S. society. There must be no restrictions and no trade-offs!” Galedo added.