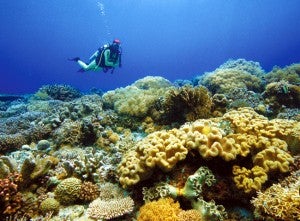 MANILA, Philippines—Was there a double standard in the government’s handling of the back-to-back intrusions of a US Navy warship and a Chinese fishing vessel in the Tubbataha National Marine Park?

The group Kalikasan People’s Network for the Environment assailed what it called the “great disparity” in the way the Aquino administration handled the grounding of the Chinese fishing vessel on Monday night and the USS Guardian in January.

“While the Philippine Coast Guard swiftly acted to apprehend the Chinese intruders, it is shameful and appalling how the Aquino [administration] handled the American trespassers from the US Navy,” said Kalikasan national coordinator Clemente Bautista.

“Any foreign intrusion into our territorial waters or infringement of our national patrimony should be dealt with accordingly. Whether it is Chinese or Americans, they must pay the damages and if proven should serve time in jail,” Bautista said in a statement.

He noted the disparity in the government’s response to the grounding of the Chinese and Americans in the Tubbataha National Marine Park in the Sulu Sea, a World Heritage Site.

“First, the PCG failed to apprehend the officers and crew of the USS Guardian in spite of their clear violations of our local and environmental laws. Second, the Philippine authorities embarrassingly failed to assert our right to directly investigate and interview the personnel of the USS Guardian as the US Navy did not allow it,” Bautista said.

“Worst, the Aquino [administration] is handling the USS Guardian grounding just like a matter of monetary compensation (for) the damaged reefs. Until now President Aquino remains deaf [to] the demand of the people to prosecute the US Navy personnel responsible for the grounding,” he said.

On Monday night, a 48-by-8-meter fishing boat with 12 Chinese crewmen got stuck on a reef in the Tubbataha marine park, prompting the deployment of Coast Guard vessels to try to extricate it. The Tubbataha park superintendent said poaching charges were to be filed against the fishermen on top of other violations.

The incident occurred nearly three months after the minesweeper USS Guardian ran aground on Tubbataha on Jan. 17. Salvors had to dismantle the vessel piece by piece in order not to further damage the reef, and only finished extricating it on March 30.

On April 5, marine scientists reported that the USS Guardian damaged 2,345 square meters of coral, and computed the fine to be imposed on the US government at $1.4 million.

“Even the valuation made by the Philippine authorities on the damage to Tubbataha Reef is extremely small. The $1.4 million is too small to rehabilitate and restore the damaged area back to its previous pristine condition,” Bautista said.

But Kalikasan said the Chinese fishermen must be prosecuted and held accountable for their unauthorized entry into the protected marine area.

“The Chinese government and its ships most likely have been emboldened (by) the Philippine handling of the recent grounding of US Navy ship on Tubbataha. They observed that it is very easy to enter the Tubbataha Marine Park and if caught there is a minimal risk for prosecution,” Bautista said.