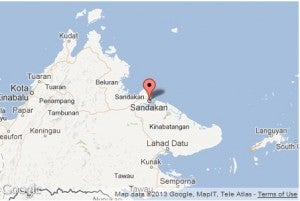 MANILA, Philippines – Malaysian authorities have arrested 32 supporters of the Liberal Party, including two of its local candidates, after strong waves brought their vessel to Malaysian waters.

Tawi-Tawi Governor Sadikul Sahali told Radyo Inquirer 990AM in an interview on Wednesday that he was coordinating with the country’s ambassador to Malaysia and Foreign Affairs Secretary Albert del Rosario for the release of several supporters of the LP as well as Rommel and Amman Matba, mayoralty and vice mayoralty candidates in Languyan town.

He said that the group unknowingly entered Malaysian waters due to strong waves and were arrested by lawmen who thought they were members of the Sultanate of Sulu.

“They are now in Sandakan for processing. I have requested for diplomatic intervention from the [Philippines] Ambassador [to Malaysia Jose Eduardo Malaya III] and DFA [Department of Foreign Affairs] Secretary Albert del Rosario,” said Sahali.

The governor said that the group was on its way to provide assistance for their campaign rally but were brought to foreign territory by the rough seas.

There were at most two police escorts, armed with “an M16 rifle and a 9mm caliber pistol,” in the group, he said.

“We are now in Turtle Islands. They signified their intention to join us here to help us in our campaign but they happened to enter Malaysian waters unknowingly,” Sahali added, saying he has yet to speak to the group.

“We are just waiting [for news]. They [the ambassador and the DFA] are already working for their release,” Sahali said.