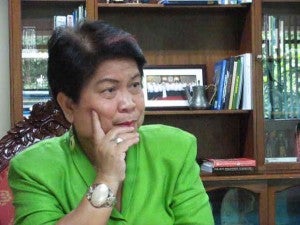 MANILA, Philippines—At least 50 representatives of government agencies in the Zamboanga peninsula and the Autonomous Region in Muslim Mindanao (ARMM) have drafted an action plan to address the heavy influx of Filipino returnees from Sabah, Malaysia.

The plan will include all contributions and possible programs from the different line agencies that could be implemented and provided to the returnees, according to Social Welfare Secretary Corazon “Dinky” Soliman.

Based on the April 5 report of the Department of Social Welfare and Development-Disaster Risk Reduction and Response Operations Office (DSWD-DRRRO), some 5,349 Filipinos have arrived from Sabah.

“The need to converge and pool our resources as well as synchronize our activities is a demand that we need to address,” said Social Welfare Undersecretary Parisya Hashim-Taradji, who presided over the meeting in Zamboanga City recently.

One action plan is to issue a Family Access Card to displaced persons from Sabah upon disembarkation at any point in Mindanao.

The Provincial Social Welfare Officers (PSWOs) of the three provinces of ARMM — Tawi-Tawi, Sulu and Basilan —  will provide color-coded cards to displaced families to entitle them to services being provided by the national and local governments to prevent duplication in the availment of the services.

Taradji explained that the access cards would systematize the provision of relief, transportation, and shelter assistance and cash-for-work to the displaced families.

She added that the DSWD deployed 12 social workers to Sabah on April 8 to reinforce the efforts of staff currently assisting the affected Filipinos.

Taradji further disclosed that the DSWD would deploy a four-man team to Tawi-Tawi and Sulu on April 9-13 to undertake needs assessment and contingency planning for the continued arrival of displaced Filipinos from Sabah.

To date, a total of P10.4 million worth of humanitarian aid was provided to the affected families through the combined resources of DSWD (P10.4 million) and NGOs (P4,100). The aid includes relief packs, hygiene kits and transportation assistance.

The One-Stop Processing Center (OSPC) in Taganak, Tawi-Tawi, is another mechanism set-up by the government to facilitate long-term interventions.  The process flow involves two phases – Phase I which DSWD is tasked to handle and Phase II where the Department of Labor and Employment (DOLE) comes in.

Phase I includes the arrival of displaced families to the Philippines, where they are immediately attended to as well as interviewed and assessed for appropriate intervention.

The OSPC mechanism was implemented in 1997 when Malaysia strictly enforced its Immigration Act.  Thousands of Filipinos were deported due to expired work papers, lack of documents and illegal residency status.