Chinese fishermen to be charged with poaching | Global News

Chinese fishermen to be charged with poaching 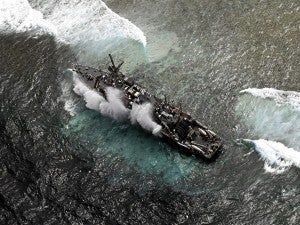 MANILA, Philippines—The superintendent at the Tubbataha National Marine Park on Tuesday said the Chinese fishermen whose vessel got stuck on a reef there would be charged with poaching and could face imprisonment on top of fines of up to $200,000.

As of 4 p.m., the 48-by-8 meter ship was still stuck on a reef, as the Coast Guard vessel deployed to extricate it was too light, Angelique Songco of the Tubbataha Management Office said.

She said rangers detected the presence of the grounded vessel at 11:40 p.m. Monday.

“They saw something on the radar, and when they went to verify it, it turned out to be positive. The ship was only one nautical mile from the station but they had difficulty communicating with the fishermen,” who were speaking in Mandarin, she told a radio interview.

“They couldn’t communicate with us, so we have no understanding of what they needed, and why they were there,” Songco said.

Following coordination with the Philippine Coast Guard and the Philippine Navy, she said, the 12 fishermen would be taken to Puerto Princesa, where they would be charged with poaching or illegal fishing.

Under Section 87 of the Fisheries Code, foreigners who poach in Philippine waters shall be fined $100,000, in addition to the confiscation of their catch, fishing equipment and vessel.

An administrative fine of between $50,000 and  $200,000 may also be imposed, according to the law. There are various other provisions penalizing illegal fishing with imprisonment, including one on the taking of endangered species, which is punishable by 12 to 20 years in prison.

Songco said the fishermen may also face imprisonment, although she admitted that most poachers escaped jail time by bailing out and paying the penalties.

She said the radar used by park rangers to detect intrusions into the protected area was open only every three hours.

“It can’t be used the whole day as it consumes a lot of energy. [Outside of] those three hours, we can’t always monitor intrusions,” she said.

She said the grounded Chinese ship, based on information from ground units, did not have any catch.

“There was no marine life, except dried fish. There are nets, but no catch. But according to Tubbataha law, if a foreign enters, it’s considered prima facie evidence, so poaching is the case to be filed against them, even without catch,” Songco said.