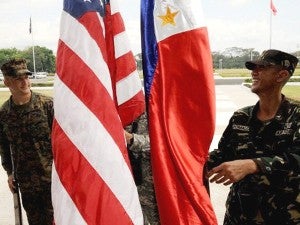 DAVAO CITY, Philippines – Militant groups are up in arms against the holding of the joint US-Philippine Balikatan exercises in typhoon Pablo-affected areas, saying US troops are only using it to set foot in mine-reach areas in Mindanao in the name of humanitarian assistance.

“Balikatan 2013 will only intensify the implementation of ‘Oplan Bayanihan’ in the hinterlands of Mindanao, especially in Davao regions where American-controlled mining corporations are presently devouring mineral deposits and resources,” Philippine Independent Church Bishop Antonio Ablon, chairperson of Patriotiko Mindanao, said in a statement.

Ablon was reacting to the statement of US Ambassador Harry K. Thomas Jr. about the so-called “strong collaboration” between the armed forces of the US and the Philippines in extending aid to typhoon Pablo survivors in December 2012.

“This is a (signal) that American forces, through the Balikatan military exercises, will again set foot here in Mindanao in the name of humanitarian relief operations,” Ablon said as militant groups led by the Bagong Alyansang Makabayan (Bayan) trooped to Camp Panacan here, expressing their protest.

Earlier, the group led protesting Pablo survivors, who demanded their share of the relief goods distributed by the Department of Social Welfare and Development (DSWD) but which they claimed they failed to receive. The protests ended up with Pablo survivors taking matters into their own hands by taking sacks of rice kept inside a DSWD warehouse.

“Again, we raise our fists and voices to condemn the exercise that truly manifests the continued intrusion of US imperialism into the sovereignty of our country,” Ablon said as the Philippines and the United States formally commenced the 29th Balikatan military exercise on April 5. The joint military exercises will involve more than 8,000 combined Filipino and American forces.

“We demand the immediate pull-out of military troops and armaments from the Philippines,” he said.

“Just like the previous joint military exercises, today’s Balikatan is clad with sweet rhetoric of humanitarianism and assistance to communities,” he added.

“This year’s fusion of Balikatan and ‘Oplan Bayanihan’ will certainly displace more ‘Pablo’ victims, especially the Lumads, already deprived of their ancestral lands and their right to self determination,” he said.

He urged people to “unite” and “to oppose in all fronts the US dominance in our land.”