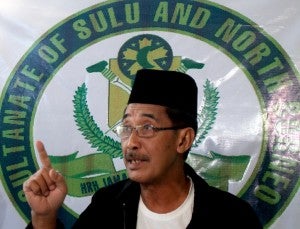 MANILA, Philippines—More than 400 “volunteer fighters” of the Sultanate of Sulu have arrived in Lahad Datu, Sabah, to reinforce the sultanate’s beleaguered “Royal Security Forces” there, the sultanate’s spokesman claimed Tuesday.

Abraham Idjirani told the Philippine Daily Inquirer by phone that the men, who were all armed, arrived in the eastern coast of Sabah in two groups between March 30 and April 5.

“They went there because of the continued human rights violations of the Malaysian [security forces] on the Filipinos there,” Idjirani said.

He added that fighting between the RSF and the Malaysian security forces erupted on the nights of April 6 and 7 in Tanjung Batu, a village in Lahad Datu. He claimed that the Malaysians suffered “heavy casualties.”

Idjirani said his information came from Agbimuddin Kiram, younger brother of Sultan Jamalul Kiram III. Agbimuddin heads the RSF and is the object of a manhunt by the Malaysian security forces.