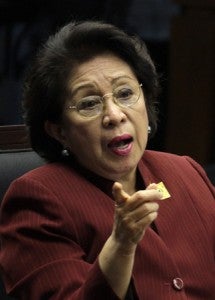 MANILA, Philippines—The Office of the Ombudsman has dismissed from the government service Consul General to Japan Ma. Lourdes Ramiro-Lopez for making false entries in her 1971 and 2005 personal data sheets (PDS).

In an 11-page decision signed by Ombudsman Conchita Carpio Morales on March 22, Lopez was held administratively liable for dishonesty, falsification of official documents, misconduct and conduct prejudicial to the interest of the service.

Aside from dismissal, Lopez also faces cancellation of her civil service eligibility, forfeiture of her retirement benefits and perpetual disqualification from public office.

In its complaint-affidavit, the Ombudsman’s Field Investigation Office (FIO) accused Lopez of “falsely declaring in her 1971 and 2005 PDS that she had obtained a bachelor’s degree in Broadcast Communication from Maryknoll College or the University of the Philippines, when in fact, she had not.”

The FIO further pointed out that based on her True Copy of Grades (TCG) issued by the UP College of Mass Communication and her Official Transcript of Records (OTR) issued by the UP Registrar’s Office, Lopez was not able to complete the 140 units required to obtain the degree at the university.

The decision also said that Lopez indicated in her 1971 PDS that she was single but in her 2005 PDS she said she was separated.

In her counteraffidavit, Lopez admitted that she got married during her sophomore year in college—way before she was hired by the Department of Foreign Affairs (DFA) in 1971.

The Ombudsman argued, however, that Lopez only disclosed her status in her 2005 PDS, despite her claim that she and her husband had been estranged before she moved to New York in 1970.

“Under civil service regulations, the accomplishment of the PDS is a requirement for employment in the government. The declarations made by every government personnel in their respective PDS are not empty statements. Rather, the PDS is an official public document,” the decision said.

Lopez began her career with the DFA as a foreign service staff employee I at the Philippine consulate in New York City. She rose through the ranks and served as foreign service officer (FSO) IV, FSO III, FSO II, FSO I, counselor and chief of mission (CM) II, CM I, DFA assistant secretary and consul general in Osaka, Japan.

Read Next
‘Balikatan not due to NoKor’
EDITORS' PICK
LTO’s P500-M deal for screws draws scrutiny
Smart reinforces superiority with best speed and mobile video experience in PH
Every Filipino home can now be a smart home with realme TechLife
Nestlé Philippines’ ‘NESCAFÉ Plan’ bags Grand Anvil at PRSP 56th Anvil Awards
New 3,045 COVID-19 cases push PH total active cases to 40,074
How to lose a PH genius: Wesley So officially a US citizen
MOST READ
US lays out list of aid to ‘satisfy’ Duterte following VFA payment demand
Robredo on Sara Duterte leading poll surveys: Why are Filipinos drawn to leadership of this kind?
How to lose a Filipino genius: Wesley So officially a US citizen
Lawyer for red-tagged tribal folk stabbed; laptop, documents taken
Don't miss out on the latest news and information.

TAGS: Ma. Lourdes Ramiro-Lopez, Office of the Ombudsman, UP College of Mass Communication