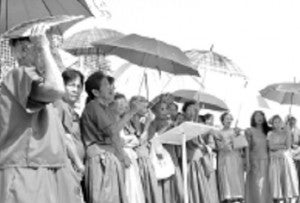 MANILA, Philippines—A lawyer from the Center for International Law on Tuesday asked the Supreme Court to reconsider its 2010 ruling that dismissed the bid of more than 70 Filipino women abused during World War II to compel the government to support their demand for apology and reparations from the Japanese government.

In an eight-page motion, the group called “Malaya Lolas” through their lawyer asked the high court to consider the Aug. 30, 2011 ruling by the Constitutional Court of Korea which approved the bid of their “comfort women” and ordered that its government settle the issue with the government of Japan.

The Korean court ruled that blocking the payment of claims is directly related to the “infringement of fundamental dignity and value of human beings.”

The Korean case stemmed from a suit filed by Korean comfort women against their own Minister of Foreign Affairs questioning the refusal of the government to settle the issue if the Japanese government can be held liable for the atrocities committed to them by its soldiers during World War II.

In its ruling, the Korean court said that issues on diplomatic ties is not an excuse because it will be more constructive for both Korea-Japan diplomatic ties and Korea’s national interest to call on the Japanese government to take on its legal responsibility towards the victims.

In 2010, the high court dismissed the petition filed by the Malaya Lolas.

The case also became controversial after the author of the decision, Associate Justice Mariano Del Castillo was accused of plagiarism. But the high court dismissed the allegation saying it was an accidentally omitted footnote by the justice’s staff.

Congress also initiated an impeachment case against Del Castillo but was eventually dismissed.