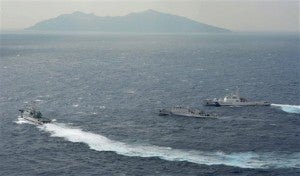 TOKYO–The rising might of China is causing it to act with increasing disregard towards its neighbors, a Japanese government-funded study said Friday.

“China, against the backdrop of its rising national power and improvement in its military power, is increasingly taking actions that can cause frictions with neighbouring countries without fear,” said the East Asian Strategic Review.

The study, being published Friday by the National Institute for Defense Studies, is an annual venture commissioned by Japan’s Defense Ministry, and influences national defense policy.

Beijing and Tokyo have been at diplomatic daggers drawn since September when Japan nationalized some islands it controls in the East China Sea.

The Senkakus, which Beijing claims as the Diaoyus, are uninhabited but resource-rich and strategically-important islands that have been the scene of confrontations between government ships from both sides over several months.

However, the report noted, China’s preparedness for pushing its territorial claims was on the rise well before Tokyo angered it with the island nationalisation.

In January last year Beijing classed the archipelago as a “core interest”, ranking it alongside Tibet and Taiwan as an issue over which it would never give ground, the study said.

It is not only China’s relationship with Japan that is becoming complicated, the report said, with Beijing’s ostensible strategic partner Russia also becoming wary of its neighbour’s rising power.

Despite Xi Jinping choosing to take his first foreign trip as China’s president to Russia for a summit with his counterpart Vladimir Putin, the “Russo-Chinese strategic partnership is more complex than it appears”, the study said.

“An equal relationship can hardly be maintained with China’s GDP at more than four times Russia’s,” it added, saying that the imbalance was leading Moscow to shore up previously fragile relations with Japan.

“Recognition that China’s maritime activities on the high seas will expand in a northerly direction in the near future is a factor motivating Russia to seek cooperation with Japan and the United States.”