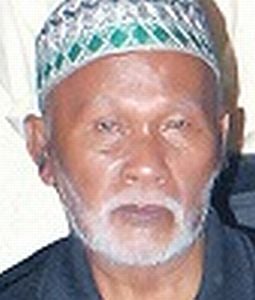 Jacel Kiram told the Philippine Daily Inquirer in an interview  that Agbimuddin regularly calls to assure family members he remains safe despite continuing operations by 5,000 Malaysian soldiers and policemen backed by armored vehicles to flush him and other remnants of the so-called “royal army” of the Sulu sultanate out of their suspected hideouts in Lahad Datu, Semporna and Kunak.

“The latest call was yesterday (Tuesday),” she said.

Jacel said that although the conversation did not last more than 30 seconds, it assured them that Agbimuddin never deserted his men in Sabah, as Malaysian security officials have been claiming.

There had been no previous report of the alleged killing of Sali or any arrest conducted by Malaysian authorities on Sunday.

The Inquirer called up a Sabah-based reporter and he said he had not heard of any “terrorist” killed by Malaysian security forces on Sunday.

Jacel said the killing of her uncle was disclosed to her family in a telephone call from Agbimuddin, who said Sali was arrested in Lahad Datu on Sunday after Malaysian security officials had ascertained he was a Kiram relative.

“My uncle and his family have been living in Sabah since the 1990s,” Jacel said.

She said, however, that details of the arrest and eventual killing of her uncle were unclear as of Wednesday.

In the interview with the Inquirer, Jacel  said that while Agbimuddin’s ill-equipped group has suffered many casualties since March 5, the group was not demoralized because of the growing support among Filipinos “agitated by human rights violations committed by Malaysian forces.”

“Those who are fighting right now are not just the 200 men. That is why the Malaysian authorities are having a hard time in fighting because they are fighting against the people,” Jacel claimed.

She continued to blame the Malaysian government for the bloody outcome of the Kiram followers’ “homecoming” to Sabah, saying Agbimuddin and his group “did not go there to fight.”

“They decided to go there out of frustration over the inaction of the government. They just wanted to spend the last days of their lives in Sabah. Many of them are already in their senior years,” Jacel said as she pointed to the decades-old Sabah claim that the Manila government has not actively pursued.

Despite the bloody outcome of the “homecoming,” Jacel said the Kiram clan “still wishes to resolve the hostilities in Sabah.”

“We do not want war,” she added as she stressed her former claim that Agbimuddin and his men were simply defending themselves against the onslaught of Malaysian forces.

“They have less than 30 firearms, that’s why they are using barong (machetes) and dos por dos (wooden truncheons) against sophisticated weapons. If their intention in going there was to wage war, why bring a small number of firearms and bladed weapons only?” Jacel asked.

Malaysian Armed Forces Chief General Zulkifeli Zin has said there was no point in talking peace with the Kirams anymore as Operasi Daulat was nearing completion.

He credited public cooperation, particularly the provision of information to security forces as one of the reasons the operation against Agbimuddin and his men was succeeding.

“Some villagers have even joined security forces in the operation to capture the Sulu terrorists who are getting weaker as their leaders have abandoned them and their armory store,” the state-run Malaysian news agency Bernama reported Zulkifeli as saying. “Public cooperation enabled the security forces to capture a Sulu terrorist general and his wife at a swamp in Semporna last Saturday.”

Zulkifeli was referring to the capture on March 23 of “Royal Security Force” general Amir Bahar Hushin Kiram, 50, and his wife, Gina Teves, 47.

The couple was nabbed at a marshy area in Kampung Sri Melor Bugaya in Semporna district around 1:30 a.m. following a tip-off, according to an earlier report by Malaysian police deputy chief Khalid Abu Bakar.