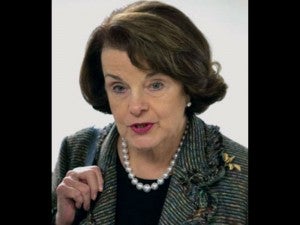 Wearing only one shoe as a symbol of how families are separated, activists sent delegations to speak to Feinstein’s staff and held a press conference, criticizing the 79-year-old senator for questioning the importance of family-based immigration during last month’s Senate Judiciary Committee hearing.

“She was the only Democrat to not speak kindly on immigration reform and say that she wondered why [immigrant] families need to bring their grandfather or sister [here to the US],” said Xiomara Corpeño, director of organizing for the Coalition for Humane Immigrant Rights of Los Angeles (CHIRLA).

The rally comes at a time when reports and leaks coming out of Washington reveal that the “Gang of Eight” senators drafting the immigration reform proposal may dramatically limit the number of green cards available for extended families in favor of more employment-based visas.

Senator Lindsay Graham (R-SC), one of the Republican leaders working on the bill, told media that there is a strong possibility that he and his colleagues are considering limiting the number of family-based visas.

“Right now you get green cards to adult children, to grandparents,” Graham told the Washington Post. “What I want to do is reserve green cards based on the economic needs of the country, and we’ll do something for families. But the goal for me is to replace a chained migration immigration system with an economic-based immigration system.”

Mexicans and Filipinos have the most at stake, if family-based immigration is limited or even removed from any proposed reform legislation.

There are 4.4 million persons whose petitions are still pending for permanent residence, according to the US Department of State as of November 2012.

Of these 4.4 million persons, the vast majority (97 percent) were applicants for family-based visas. Over a third of those waiting are either from Mexico (1.3 million) or the Philippines (462,000). The two countries also have the longest wait times anywhere upward to 25 years for siblings of US citizens.

Since only 226,000 family-based “preference” immigrants attain lawful permanent resident status each year, at this rate according to Migration Policy Institute, it would take 19 years to clear the backlog.

“The family petition system is critical for all people for Mexicans just as much as Filipinos, for Chinese, Vietnamese, and Dominicans,” said Corpeño.

Feinstein has not made any official stance regarding immigration reform or support for family based immigration.

“Right now, she’s sitting on the Senate Judiciary committee and she’s not doing anything for immigration reform,” said Corpeño.

“As you work on your draft legislation, however, we urge you to prioritize clearing the backlog of family visas and ensuring that going forward the reformed system makes it easier for people to be united with their families, including their brothers and sisters and their adult children,” the senators wrote in a letter released on March 20.

The senators continued, “According to a recent media report, the proposed bill would eliminate family-based admission categories for the married adult children and siblings of US citizens. This is very troubling. Different types of family members can play an important role in each other’s lives, and for some Americans a brother or sister is the only family they have.”

Betty Hung, policy director for the Asian Pacific American Legal Center (APALC), said these Gang of Eight senators really need to understand the dynamics and the role extended family members can have here in the US.

“Family is so important so for these [gang of eight] senators to say that it’s okay to separate brothers and sisters or if it’s okay that if your child is over 21 and happens to be married, are they somehow no longer your family? A child at any

age is your family. Brothers and sisters are family. That is so fundamental to being human and what they are proposing is so contrary to our humanity and our love for our families,” said Hung.

In a couple of weeks, after Easter recess, the gang of eight senators are expected to introduce their immigration reform legislation. Corpeño said this is the reason why they held the press conference and urges the community to call their local congressman and senator to not limit family-based immigration.