Malaysia vows to get leader of Sulu band 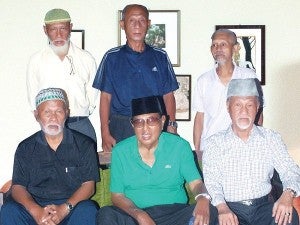 MANILA, Philippines—Malaysia has vowed not to stop until it gets Agbimuddin Kiram, leader of an armed group from Sulu whose incursion into Sabah last month has taken the lives of dozens of Filipinos and Malaysians.

After establishing a coastal security zone in eastern Sabah, the Malaysian government is also encouraging Sabahans to be more vigilant to prevent further incursions into the territory by followers of the sultan of Sulu who are trying to retake the state from Malaysia.

The Eastern Sabah Security Zone, completed last week and manned by police and military troops, has been established to watch the coastal areas of the state for intruders from Sulu.

Speaking at the 206th anniversary of the founding of the Royal Malaysian Police in Kuala Lumpur on Monday, Prime Minister Najib Razak praised the residents of Senalang village in Semporna town for taking head on a fighter from Agbimuddin’s group on March 3.

The fighter, a member of the Moro National Liberation Front (MNLF), gathered the villagers at a mosque and threatened them with his M-16 rifle.

But at one point the fighter made the mistake of lighting a cigarette.

The moment he lowered his rifle, the villagers rushed him and clubbed him to death.

“In their attempt to defend themselves and the country, the terrorist was killed,” Najib said.

“Their deed and bravery are most appreciated,” Najib said.

The leader of the intruders, Agbimuddin, a brother of Sulu Sultan Jamalul Kiram III, is believed to have abandoned the so-called Royal Security Forces of Sulu and North Borneo and slipped out of Sabah at the height of a police-military crackdown on the intruders at the start of March.

But Philippine authorities say they have no information that Agbimuddin has returned to the Philippines, while his family in Manila insists that he is still in Sabah.

Malaysian Attorney General Gani Patail, speaking in Kuala Lumpur on Monday, said Agbimuddin can not escape the long arm of the law.

“You commit such an offense and we will go after you.” Gani told reporters.

According to Malaysian military information, Agbimuddin survived air and artillery strikes in Tanduo village in Lahad Datu district on March 5 and could have slipped out of Sabah through a route well known to MNLF fighters who used the area for training at the height of the Moro rebellion in the 1980s.

Agbimuddin, whose so-called security forces are MNLF fighters, is believed to be hiding in southern Philippines, moving from island to island to avoid detection.

He could have fled Sabah on March 15 and part of his group, consisting of 38 people in two boats, was intercepted by the Philippine Navy off Tawi-Tawi on that day.

Agbimuddin’s 38 followers are facing criminal charges, including inciting to war, in a Tawi-Tawi court.

The court has ordered a new investigation of the 38 because they were arrested without warrants.

Justice Secretary Leila de Lima said on Tuesday that she would designate a group of prosecutors to handle the new investigation.

The new investigation does not mean the government’s case against the 38 is weak, De Lima said.

“[The new investigation] is a remedy provided under the Rules of Court,” she said. “They were arrested without warrant, and one remedy available to [them] is a reinvestigation, or preliminary investigation,” she added.

De Lima explained that after the arrest of the 38, they were put through an inquest and they were unable to present evidence in their defense.

A preliminary investigation will give them that chance, she said.

The suspects are being held in a naval base in Tawi-Tawi.

On orders from President Aquino, Agbimuddin has been declared “a wanted man” in Tawi-Tawi, according to Gov. Sadikul Sahari.

The government’s plan is to bring charges against Agbimuddin and imprison him here.

Malaysia, however, can ask the Philippines to hand over Agbimuddin under a legal assistance treaty approved by all 10 members of the Association of Southeast Asian Nations (Asean).

In the Philippines, Agbimuddin can expect to be charged with offenses with international application, such as inciting to war, for which he could draw life imprisonment.

In Malaysia, Agbimuddin can expect to face charges of terrorism and waging war against Malaysian King Abdul Halim for his intrusion into Sabah. He could be given the death penalty.

Fighting between Agbimuddin’s group and Malaysian security forces has taken the lives of 65 fighters from his group and eight policemen and two soldiers on the Malaysian side.

Defense Secretary Voltaire Gazmin said on Tuesday the Philippines had no information to bolster the Malaysian military report that Agbimuddin had returned to the Philippines.

“We have no report to that effect,” Gazmin told reporters.

He said the Philippines and Malaysia had agreed to share information about Agbimuddins’ incursion into Sabah.

The Malaysian security forces have deployed 12 battalions to hunt down Agbimuddin and his men, Gazmin said.

Agbimuddin’s group has reportedly split into small units that have spread out to other parts of Lahad Datu to escape pursuing troops.

“Remember [Agbimuddin] has been there for quite some time and he has been moving in and out of Malaysia, so he knows the terrain,” Gazmin said.

“He has a lot of relatives. Once upon a time he was a (local official) so he knows the area,” Gazmin said, referring to Malaysian information that Agbimuddin once served as a local official in Sabah, and is a Malaysian citizen.

If it is true that Agbimuddin is Malaysian, then Malaysian laws should apply to him while he is in Sabah, Gazmin said.

Asked if the government is verifying Agbimuddin’s real citizenship, Gazmin replied: “I cannot give you a definite answer on that. Maybe we are. But we have not found any conclusive answer yet.”

Gazmin described Agbimuddin as like a fish in the water. “Take out the water, you find the fish,” he said.

Agbimuddin’s family in Manila denies he has returned to the Philippines, saying Malaysian talk of his fleeing to Sulu is merely “propaganda.”