Coconuts for cigarettes and the human faces behind the Spratlys dispute 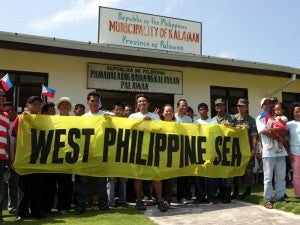 Filipino lawmakers led by Representative Walden Bello join local residents and military officials in a symbolic unfurling of a banner at Pagasa Island, part of the disputed Spratly group of islands, in the West Philippine Sea on July 20. AP

SAN FRANCISCO—Ever since the Spratly dispute became big news in the 1970s, I had always imagined the place as just a bunch of desolate, uninhabited and uninhabitable islands.

Thanks to recent media coverage that has changed.

Finally, we’ve seen the human faces behind the battle for the Spratlys.

The mission of the Philippine Congress members led by Rep. Walden Bello was unusual and controversial.

But while it annoyed Beijing, and certainly had the feel of a political publicity stunt, it had one clear positive effect: It gave us a glimpse of the people who would be directly affected if war does break out.

The seemingly never-ending dispute that threatens to plunge the Philippines into a war with a much more powerful neighbor is now no longer just about a battle for territory, or resources.

The Spratlys is about Eugenio Bito-onon, the soft-spoken mayor of Kalayaan, whose big dream, as reported by the Associated Press, is to bring Internet connection to his municipality so residents can log on to Facebook.

It’s about construction worker Nonelon Balbontin, who unexpectedly found peace on the island. It’s about the group of Filipino women, some of them carrying babies, shown an Associated Press photo of life in Kalayaan.

And yes, it’s even about the Chinese and the Vietnamese soldiers and fishermen who live in neighboring islands, and with whom the Filipinos of Kalayaan even do business with every now and then.

Their stories were the best parts of the recent coverage, although they ended up being buried in most of the news reports.

There’s the part about how Filipino fishermen would barter coconuts for Chinese cigarettes.

There’s Mayor Bito-onon’s story of how Chinese and Vietnamese soldiers stationed on nearby islands would sometimes fire warnings shots at approaching Filipinos who would then raise their fish on skewers to signal they’re just fishing. In response, the soldiers would smile and even signal back to ask if they could have some of their catch.

These human connections are important.

For in this latest flare-up over the Spratlys, one thing is clear: With all the saber-rattling, the chest-pounding, and macho-talking—especially among politicians on both sides—the controversy could so easily spin out of control.

To be sure, the Philippines clearly has a strong case based on international law. And even just a quick glance at the map showing the disputed islands would make one think: ‘Whoa, that’s a pretty big area, with islands right off the coast of Palawan, that China is claiming!’

But there’s more at play here than international law and lines drawn on a map.

The fact that the Spratlys is rich in oil has been noted as a key issue in the dispute.

But it’s odd to read statements about ‘protecting our oil’ from Filipinos eager to defend the Philippine claim. After all, it’s usually the few well-connected, and well-financed parties who have typically prevailed in a scramble to exploit an oil-rich part of the Earth.

And with the recent oil spill disaster in the Gulf Coast of the United States, and the worries about climate change—and having been given a glimpse of the beauty of the Spratlys—should we really look forward to this paradise being surrounded by oil rigs and have the prospect of another ecological disaster within the Philippines’ exclusive economic zone?

What’s most troubling is that, if tensions do escalate, so could the xenophobic rhetoric on both sides. You can already see some of it bubbling up from both Filipinos and Chinese on the Web.

And with our own history of anti-Chinese paranoia, you really need leaders who can assert Philippine sovereignty without stirring up, intentionally or unintentionally, misguided emotions.

There are many recent reminders of how misplaced nationalism can cause serious damage. I’ve seen them here myself in San Francisco Bay Area as a reporter.

I’ve written about Croatian, Bosnian and Serbian refugees who fled here to escape the brutal ethnic wars in the Balkans. I’ve interviewed ethnic Chinese who escaped from the waves of anti-Chinese attacks in Indonesia in the late 1990s triggered by the Asian financial meltdown.

Yes, the Spratlys is about asserting, affirming Philippine sovereignty.

But if we lose sight of what’s really important, the dispute could also lead to outbursts of ethnic hatred.

That could happen, if we get misled by reckless talk of dying for the motherland, and dreams of oil riches.

If we forget about those fishermen who are happy to trade coconuts for cigarettes.

Or even those soldiers from supposedly hostile neighbors who would act tough by firing warning shots into the air—and, realizing that the would-be enemy is no enemy, but a fellow Spratly resident, would then smile and jokingly ask a fisherman if they could have a fish or two.