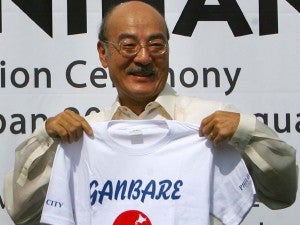 MANILA, Philippines—The Japanese government has provided the Philippines fresh P23.19 billion in loans for critical transport infrastructure projects, including the upgrade of two metro railways and the construction of a higher-capacity airport in Bohol.

Japanese Ambassador Toshinao Urabe and Foreign Affairs Secretary Albert del Rosario signed loan agreements on Monday, for the P18.56-billion extension of Light Rail Transit lines 1 and 2 and construction a new P4.63-billion airport in Panglao.  Urabe himself experienced less than ideal conditions at the Bohol airport during a trip in November, when his flights going in and out of the province were delayed by an hour each way. He noted that such delays had a ripple effect on other flights.

Monday’s signing formalized an earlier announcement of Japanese Foreign Minister Fumio Kishida during his visit to Manila in January.

Details of the projects have yet to be released, but the DFA said the Panglao airport project would upgrade the existing Bohol airport to international standards.

Apart from the loans, the Philippine and Japanese sides announced the award of grant aid totalling P443.33 million for the construction of hydropower projects in Ifugao and Isabela.

The DFA said the “mini hydropower projects” in the two provinces would be part of the Department of Energy’s program “to develop renewable energy resources for energy sustainability, stability and security.”

Urabe said the projects would apply Japanese technology that “use small amounts of water to generate cheap and clean electricity.” The hydropower system will also have minimal negative effect on agriculture, Urabe said.

ADVERTISEMENT
Read Next
Aquino orders CAAP to get PH airlines flying to US, Europe again
EDITORS' PICK
Cherry Mobile teams up with Cloud Panda PH, launches online store
Leveling up your ‘lutong bahay’ with the kitchen companion you never knew you needed
Trump took shelter in White House bunker as protests raged
WATCH: Edsa traffic blues on GCQ Day 1
Someone from the Philippines can become $356 Million richer this Tuesday
Calida attends House hearing on ABS-CBN franchise
MOST READ
‘If I had not been SolGen, I will make you eat your words,’ Calida tells Coco Martin
5 car dealership outlets shutting down
Calida says he is not ‘at loggerheads’ with Congress on ABS-CBN issue
WATCH: Edsa traffic blues on GCQ Day 1
Don't miss out on the latest news and information.