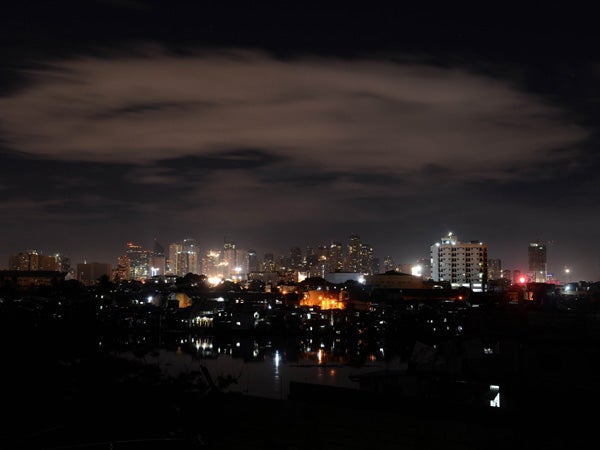 This general shot shows buildings from Manila’s financial district after the lights were turned off to mark Earth Hour in Manila on March 23, 2013. AFP

MANILA, Philippines—It’s a gimmick, but it works.

This was how the World Wide Fund for Nature (WWF)-Philippines defended the country’s participation in Earth Hour which it has consistently topped since 2009.

Even though 1,640 Philippine towns, cities and provinces, and some big local corporations, had committed to shut off their lights from 8:30 to 9:30 p.m. last night, skeptics still abounded, especially online.

In an article posted on Slate.com, Copenhagen Consensus Center director and environmentalist author Bjorn Lomborg said that Earth Hour “actually increases CO2 emissions,” claiming that, among other things, emissions surge when coal or gas stations are fired up again “to restore electricity supplies afterward,” and that during the hour, people tend to shift to the use of a common fossil fuel—candles.

Lomborg called out the activity for being a “vain symbolism” of “feel-good environmentalism.”

But Earth Hour Philippines communicator Gregg Yan shrugged off the criticism. “He’s right. It’s a gimmick,” Yan said. “But it’s a gimmick that changes how people act throughout the rest of the year.”

In a statement, the Earth Hour spearhead group, the WWF, explained that Earth Hour founder Andy Ridley envisioned the activity in 2004 as “a highly visual, lights-out event to showcase unity for climate change solutions.”

Earth Hour Philippines national director Gia Ibay described the activity’s mission as “threefold—to bring people together via a symbolic hour-long event; to galvanize people into taking action beyond the hour; and to create an interconnected global community working toward sustainable living practices.”

Yan said that while the Earth Hour activity may only be symbolic, it had crucially changed the mindset of individuals and institutions when it came to environmentalism.

“Since we began in 2008, more Filipinos and institutions are becoming aware of the need to go green…Entire cities and corporations are now shifting. We’re seeing the advocacy take hold,” he pointed out.

“More and more corporations are stepping up to bring our message of hope and sustainable living to greater heights,” said WWF-Philippines vice chair and CEO Jose Ma. Lorenzo Tan in a statement.

Of about 100 official Philippine Earth Hour events this year, close to 80 percent were by corporations, businesses and malls.

Using Earth Hour as a launch pad, the group is pushing renewable energy sources, and the widespread use of energy efficient appliances.

Although for the skeptics who still need numbers: “We did save up to around 650 megawatt-hours in [Earth Hour] 2009, which is equivalent to shutting down a dozen medium sized coal-fired power plants for an hour,” Yan said.

Last year, a 362-megawatt-hour reduction in electricity use in the Philippines was reported during Earth Hour which was participated in by a record-breaking 1,671 cities and towns.

For the fifth straight year, the Philippines was again poised last night to lead in the global Earth Hour event, organizers said.

Two years after Earth Hour’s launch in Australia, the Philippines has consistently topped the event in terms of the number of participating cities and towns, earning the title, “Earth Hour Hero Country.”

In the cities of Cebu, Bacolod and Iloilo in the Visayas, a concert, a neon zumba and film showing were among the activities that marked last night’s observance of Earth Hour.

Elsewhere in the world,  iconic landmarks including the Sydney Opera House, the Empire State Building in New York and the Eiffel Tower in  Paris cut their lights on Saturday.

Last year, more than 150 countries participated in the event and this year the movement has spread to Palestine, Tunisia, Suriname and Rwanda. With reports from Connie E. Fernandez, Karen Bermejo and Carla P. Gomez, Inquirer Visayas and AFP