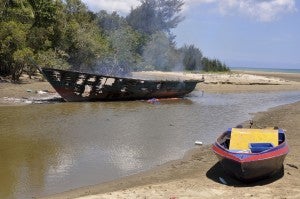 DIGOS CITY, Philippines—With more than 5,000 pairs of eyes watching over the cordoned areas of Sabah, such as Lahad Datu, Tawau and Kunak, and surrounding waters and boundaries with other countries, how did a ragtag band of ill-equipped fighters skip detection and continue to roam about, or possibly escape, out of the Malaysian state?

Through the use of mystic powers, a ranking police official said. Belief in mystic powers is common among Asian people and Malaysians are not an exception.

The unidentified ranking Malaysian police source, who was quoted by the state-run Berita Nasional Malaysia (Bernama) in a news dispatch, has provided a window on what Malaysian authorities might have been thinking in explaining this development as Operasi Daulat, the assault on the so-called intruders, entered into its 17th day on Friday.

This developed as tales of gunmen slipping out of the cordoned areas and regularly venturing into villages in Lahad Datu and other areas of Sabah have spread.

Among these reports was a claim by a woman that several hostages were held by the gunmen during one of their forays on Thursday night, a Sabah radio station said on Friday.

The radio station said since the reports spread, villagers had left their homes in Felda Kembara Sakti, some 20 kilometers from Felda Sahabat, and sought refuge in a mosque.

This forced Sabah Deputy Police Commissioner Tan Kok Liang to go on air, also on Friday, to announce that the police had found no evidence the reported incident took place, the station added.

“We have interviewed the woman and she was not clear about the details. Nobody else saw any movement of the gunmen in the area,” Tan said.

In the Bernama report on the alleged use of mysticism by the Sulu gunmen, the source was quoted as saying the Sulu gunmen, led by Agbimuddin Kiram, use “elements of mysticism” and this was evident in “the marks found on their bodies,” citing police reports on bodies of slain or captured suspects. The tattoos, he said, were that of “Koranic verses.”

There were also a hoard of items found on the “terrorists,” the official was further quoted as saying.

“[These include] amulets, which [authorities] believed could make the terrorists invulnerable and a calendar used to predict a suitable day to attack the security forces,” the Bernama source added.

Malaysian Police Deputy Inspector General Khalid Abu Bakar, who spoke at a news conference that a Sabah radio station covered on Friday, confirmed that tattoos reflecting Koranic verses and amulets had been found on bodies of slain suspects.

“They also used prediction cards (known among Malaysian and Philippine Muslims as Kutika) in planning their attacks,” Khalid said.

This practice of mysticism, the source said, might have been the main reason the Sulu gunmen were emboldened to take on the Malaysian forces, consisting of some seven Army battalions and a large number of policemen, who were backed by air power, artillery and armored personnel carriers.

In contrast, Agbimuddin’s men were mainly armed with vintage Garand and Carbine rifles, aside from krises and machetes, as indicated by an earlier police report on the types of recovered weapons from slain Sulu warriors.

The same police source said mysticism could indeed make one “immune to bullets,” adding that on one body, there were “black marks believed to have been caused by bullets.”

But he said the large number of slain “terrorists,” numbering 63 so far, also proved that mysticism or amulets cannot save one’s life all the time.

“In fact, a mortar explosion can kill them even if their skins were impenetrable,” the official said.