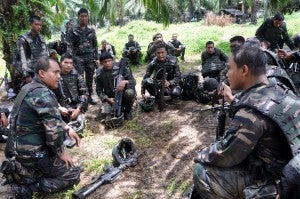 Khalid, speaking over a Sabah-based radio station whose bradcast was monitored here, said Malaysian policemen raided the commander’s hideaway “on a marshy area of Semporna” and collared the “commander of the terrorists” and his wife around 1:30 a.m.

He did not identify the arrested suspect but added that the development, brought about by a tip-off, had “crippled the movements of the terrorists from Sulu who intruded into Lahad Datu.”

Khalid said  that on Friday night a Sabahan of Filipino descent, “who provided all the needs of the terrorists from the early days of their landing in Kampung Tanduo on Feb 12” had also been arrested.

He said the “collaborator,” who is his 40s, was arrested around 10 p.m. Friday in Tanduo.

“The local coordinator has been identified as the individual who made arrangements for food and drinks, accommodation, transportation and medicine for the terrorists since the early part of the intrusion,” Khalid was quoted as saying by the state-run Radio 24 in a similar report.

Radio 24 also quoted him as telling reporters in Felda Sahabat on Saturday that the capture of the suspects had weakened the “terrorists,” because aside from being “leaderless,” they lost an important support especially for food.

In an interview with another Sabah-based radio station, Khalid said the “collaborator” was the son of a former Tanduo village chief, who is Filipino by blood.

“He was among four people, two of whom are key figures behind the group, who were arrested over the past 24 hours,” Khalid said.

Khalid said the fresh arrests brought to 408 the number of people arrested as Operasi Daulat (Operation Sovereignty) entered its 19th day Saturday. Only 111 were being investigated for terrorism and rebellion against the Malaysian king, while the rest were being held for violating restrictions on movements by civilians in several places in Sabah.

Since Ops Daulat was launched, 63 suspected Sulu gunmen have already been killed while the Malaysian side suffered 10 deaths – eight of them policemen. Khalid said 38 bodies of the 63 have been retrieved by Malaysian authorities.

He said Ops Daulat would continue until the security of Sabah has been ascertained.

Malaysian police chief Inspector General Ismail Omar told reporters in Kuala Lumpur earlier that the establishment of the 1,400-kilometer Eastern Sabah Security Command (Esscom) was both a short- and a long-term solution measure to prevent future intrusions by foreigners into Sabah.

Ismail, according to the state-run news agency Berita Nasional Malaysia, told reporters that “Esscom would play a major role in maintaining peace in Sabah and it will monitor the coastline and detect any suspicious activities, including preventing any terrorist intrusion in future.”

The enhanced security zone, which is aimed at protecting the territory’s population of more than 1.4 million, will cover the shoreline of Sabah from Kudat to Tawau, and will involve about five battalions from the Royal Malaysian Armed Forces and the General Operations Force (GOF) of the Malaysian Royal Police.

The investigation of more than 100 suspects directly linked to the Sabah intrusion was being handled by more than 300 personnel from the Malaysian police’s Criminal Investigation Department, according to a New Straits Times report that quoted Khalid.

“Investigations are still ongoing and we will see what possible actions can be taken against those currently being detained under the Sosma (Security Offense and Special Measures Act),” the NST quoted him as saying.

Under Sosma, a suspect can be held for 28 days under police custody without charges.