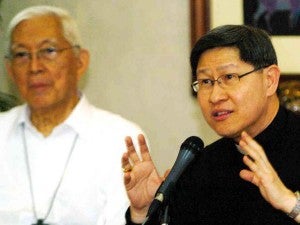 MANILA, Philippines—“One unique gift that Pope Francis will bring (to the papacy) is personal encounter, which is really important for the Church. The Church is, in the end, a communion, a relationship in faith. I think that aspect will become stronger,” Manila Archbishop Luis Antonio Cardinal Tagle said.

Tagle returned Thursday after attending the conclave that elected Pope Francis last week with this impression of the new leader of the Catholic Church.

Retired Manila Archbishop Gaudencio Cardinal Rosales, who arrived from Rome with Tagle and retired Cebu Archbishop Ricardo Cardinal Vidal, said the new Pontiff might visit the Philippines in 2016 to attend the 51st International Eucharistic Congress—a quadrennial event to be held this time in Cebu City.

“I told him, ‘Your Holiness, we are going to prepare for your first pastoral visit to the Philippines.’ He said, ‘Vamos a ver’ or ’We are going to see.’ We have an inkling, we have a feeling that he might, he might [come],” Rosales said.

Tagle also said in a news conference at the Ninoy Aquino International Airport that he knew Francis personally even before the former Cardinal Jorge Mario Bergoglio of Argentina was elected to the papacy, having worked with him when they were elected to the Council of the Synod of Bishops in 2005.

“For three years we worked together. And then in 2008, we were also together in the International Eucharistic Congress in Quebec,” Tagle said.

“He wrote me letters from Buenos Aires. Sometimes, he would read an interview of mine and then he would write to congratulate or to highlight a few things that I said in the interview,” he said.

“But I can’t remember an instance when I answered any of his letters back. Now, I will have to answer his letters because he is the Pope,” he said.

“You see that kind of person. He was a cardinal at that time in 2005 when I was still bishop of Imus but he knew how to reach out to people. He does not look at the ranking, he knows how to affirm and encourage people. I experienced that,” Tagle said.

Message from a priest

Tagle recounted that after the conclave during a meal with the cardinals, the former archbishop of Buenos Aires approached him to convey a message from a Filipino priest.

“I could see him from his table when he suddenly stood up and started walking to our table. Little did I know that it was me whom he was going to approach. He told me, ‘I called the nunciature in Argentina and I was able to talk with a Filipino working there, Father Catalan… and he asked me to give his greetings to you. Now I have relayed his greetings, I obeyed Father Catalan.’ The Pope obeying a priest working in the nunciature?” Tagle narrated, expressing amusement.

Tagle underlined the determination of Francis, shown in the first days of his papacy, to reach out to the masses to strengthen a Roman Catholic Church endangered by secularism.

He described how Vatican Swiss Guards with him reacted with shock when they watched on television how Francis plodded into a crowd after celebrating Mass on Sunday at a Vatican church.

“I was watching it on TV with some Swiss guards and I could see the reaction was, ‘Oh no, no, the Pope is going…’” Tagle said, adding that he admonished the security men to calm down.

He said he believed Francis would at the same time be a firm disciplinarian and address issues hounding the Church, including corruption in the curia and allegations of sex abuses against priests.

“In Argentina when he was an archbishop, he also faced tough situations and he survived. And he seemed to have contributed to the stability of the Church there,” he said.

“He is not alone,” he said. “I’m sure every Pope will experience the limitations of his person, of his intellect, of his capacities. But it’s not only God who will be with him but many good and well-meaning people in the Church.”

Asked how he felt being considered a “papabile,” Tagle laughed:

“Those were speculations of outsiders. No cardinal ever told me or wrote to me before the conclave that ‘Hey you are a contender.’ It is the product of speculations from different sectors, especially social media. I am just happy that they are not the electors.”

Tagle said that during the conclave, he and his fellow cardinals tried their best to listen to each other and the situation of the churches in different parts of the world.

“And each one had to make a decision before God who is being given to us by the Holy Spirit as a pastor … whether the cardinals deliberately made a prior decision that the new Pope should come from this geographical space, we did not,” he said.

Asked if he thought there was indeed a danger that the Church could become a pitiful NGO just as Pope Francis had said, Tagle replied, “It has always been a danger in the history of the Church.”

“You see the plight of people and you want to serve but the motivation of the Church for being of service is really the faith. And while it is true that some people can engage in some humanitarian work, some do it not necessarily out of faith and so the Pope has been warning the Church that we should go back to that encounter with the Lord as the font of our charitable work, as the font of our service to the poor,” he said.

“What he was trying to say is go back to the roots. Go back to Jesus Christ. Even Pope Benedict reminded the Church of that, because in some parts of the world many people engage in good work but they say we can do good work even without believing in Jesus Christ. And the new Pope, coming from Latin America, where the Church is very much involved in social concerns, I think that is a reminder that comes from his own experience. It is always good to serve the poor but the quality of the service of the poor is of the faith, not purely social work.”