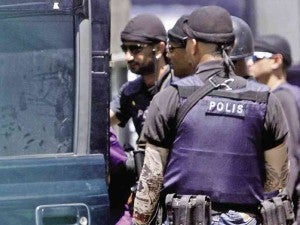 Malaysian policemen lead away a suspected intruder from Sulu in Lahad Datu on Wednesday. MALAYSIA’S THE STAR/ASIA NEWS NETWORK

Malaysia brought criminal charges against eight Filipinos on Wednesday, more than two weeks after a standoff in Sabah between Malaysian security forces and an armed group from the sultanate of Sulu erupted into violence that killed 72 people.

More than 100 others face similar charges.

It was not clear whether the eight were the first of the captured followers of Sulu Sultan Jamalul Kiram III who, together with more than 200 others, slipped into Sabah on Feb. 9 and seized the coastal village of Tanduo in Lahad Datu town to stake their clan’s ancestral claim to the eastern Malaysian territory.

The eight men, whose ages ranged from 17 to 66, did not enter a plea, and no further hearing dates were immediately scheduled as the case was being transferred from a Sabah district court to a higher court, according to the state-run Bernama news agency.

Abraham Idjirani, spokesman for the sultanate of Sulu, condemned the filing of terrorism charges against the eight Filipinos, saying Malaysian prosecutors have not fully disclosed the evidence used in the complaints against the suspect.

Idjirani said he feared the rights of the eight men were being violated and that there was a lack of transparency in the handling of their cases.

“In the first place, these Filipinos, if indeed they were involved, were just defending their rights because Sabah belongs to the sultanate and the Filipino people and Malaysia is just the administrator,” Idjirani said.

Idjirani urged the Malaysian authorities to release the suspects and called on the administration of President Aquino to provide them with legal assistance.

Christopher Leong, vice president of the bar council, said Wednesday his group would talk to Abdul Gani about giving legal assistance to the detainees.

Police filed charges of launching terroristic acts under Section 130A of the Penal Code and waging war against Malaysian King Abdul Halim under Section 121 of the code against the eight men in a makeshift courtroom in Lahad Datu.

Section 130A provides for a jail term of up to 30 years, while Section 121 provides for the death penalty on conviction.

Twelve members of the armed group led by Jamalul’s brother, Agbimuddin Kiram, were killed and 10 others were captured when Malaysian police launched an assault on Tanduo on March 1, after a 17-day standoff.

The assault ended in a rout for Agbimuddin’s group, which led to the spread of violence to other parts of Lahad Datu, triggering evacuations of entire villages to avoid casualties among the civilian population.

Fifty other men from Agbimuddin’s group were killed in skirmishes with Malaysian police and military troops in three other villages in Lahad Datu where the sultanate’s followers spread out after the rout in Tanduo.

Eight Malaysian policemen and two soldiers were killed in fighting between the security forces and small units from Agbimuddin’s group.

Malaysian police arrested 107 people in other villages in a crackdown on Jamalul’s supporters in Sabah.

Those arrested include suspected members of Agbimuddin’s group, uniformed personnel and villagers who might have directly or indirectly abetted the Sulu group.

Police said the 107 people were arrested in Lahad Datu, Semporna, Kunak, Sandakan and other parts of the state.

Hamza said the suspects were arrested under the Security Offenses (Special Measures) Act of 2011 but would be charged under the Penal Code.

Skirmishes between Malaysian troops and about 50 men from Agbimuddin’s group were reported in Tanjung Batu on Wednesday as the military cleared the area of the Sulu sultan’s followers.

There were no immediate reports of casualties on either side.

The fate of Agbimuddin remained uncertain Wednesday despite reports that he managed to slip out of Sabah after the March 1 rout of his group.

Malaysian military chief Zulkifeli Zin said on Friday that Agbimuddin had fled to southern Philippines and most likely hiding in Tawi-Tawi.

His family in Manila insists Agbimuddin is still in Sabah and that reports that he has abandoned the sultan’s followers there as propaganda of the Malaysian government.

Agbimuddin will be arrested if he returns to the Philippines. Thirty-eight members of his group who slipped out of Sabah were intercepted by the Philippine Navy off Tawi-Tawi last week and were charged in court there.

“Our police and Navy are on the lookout for him,” Tawi-Tawi Gov. Sadikul Sahari was quoted as saying by The Star newspaper of Malaysia about reports that Agbimuddin was in hiding in the south.

The Malaysian and Philippine governments had sought for weeks to end the occupation of Tanduo peacefully by urging Agbimuddin’s group to leave without facing charges.

But the killing of two Malaysian policemen by Agbimuddin’s men on March 1 sparked the police assault that dislodged them from Tanduo.

The recovery of the beheaded bodies of two other Malaysian policemen in Semporna on March 2 drew air strikes and artillery attacks from the military.

Hamza explained that APCs had better mobility compared with military tanks and could have better access to rugged areas within the zone of security operations.

“We are better equipped now and we expect to complete clearing the Tanjung Batu area in the next 24 hours,” Hamza said.—Reports from Allan Nawal, Inquirer Mindanao; AP and The Star/Asia News Network

PhilHealth lost over P153B since 2013 due to fraud, PACC exec says