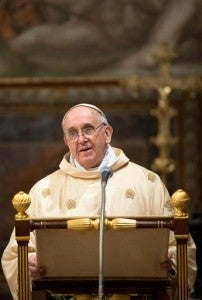 Binay said he invited the Pope during a meeting after the latter’s installation and inaugural Mass Tuesday evening in Vatican and the pontiff answered “probably” to his invitation.

“Pope Francis also asked the Filipino people to pray for him,” Binay said in a statement on Wednesday.

“He told me: ‘Please pray for me,'” the Vice President added.

It was former Pope Benedict XVI who announced in 2012 Eucharistic Congress that the next congress will be held in Cebu, which is acknowledged as the country’s “cradle of faith.”

The congress is held every four years.

The Philippines last hosted the congress in 1937, with re-evangelization as the central program.

In his meeting with the Pope,  Binay said he also conveyed  the well-wishes of the Filipino people.

“I extended the greetings of the Philippines to Pope Francis,” he said.

The Vice President was asked by President Benigno Aquino III to represent him and the country in the installation.