Lawyer to give NBI statement on plot to kill Jamalul Kiram 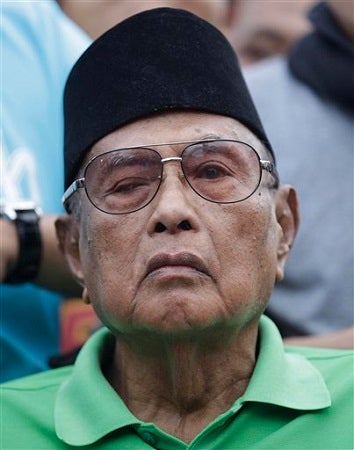 MANILA, Philippines—A lawyer was to appear at the National Bureau of Investigation on Wednesday to file an affidavit on a plot allegedly drawn up by the Malaysian military to kill Sultan Jamalul Kiram III of Sulu and his supporters, Kiram’s daughter said.

She said the meeting was arranged by Malaysian businessman Kenneth Lee, who was connected with a Malaysian firm where Lozada works as a law consultant.

“They intimated to (Lozada) that they are here to assassinate the sultan and his friends (including his adviser Pastor Saycon),” Jacel said at a press conference in the Kiram residence in Taguig City.

Jacel said the NBI and Armed Forces officials had committed to look into the alleged plot to assassinate Kiram, members of his family and their followers.

“Malaysia is emboldened to act radically because of (President Aquino’s) pro-Malaysian statements,” she said.

On Tuesday, Kiram spokesperson Abraham Idjirani claimed that Ng and four “commandos” had arrived in the country to kill the sultan and his supporters.