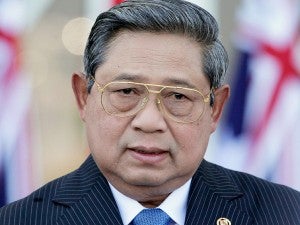 “I hope that the problem in the Malaysian state of Sabah between Malaysian security forces and a group of armed Filipinos could be resolved soon,” Yudhoyono was quoted as saying by Antara, which is monitored by the Inquirer in Davao del Sur.

The Indonesian president said that if the Sabah crisis was not resolved soon, he would  “pursue a diplomatic approach in the near future, because it’s bad.”

“It does not mean that Indonesia will intervene in Malaysia’s internal affairs, no,” Yudhoyono said.

He expressed concern about the conflict that had claimed more than 60 lives and hoped that the two parties could find a peaceful solution to the problem.

Indonesia once had a territorial dispute with Malaysia over parts of Sarawak and Sabah. The dispute was later settled peacefully.

Indonesia and Malaysia share borders with Brunei in the former North Borneo, with Kalimantan as the Indonesian province nearest Lahad Datu, about 40 kilometers away, where the Filipino force landed last month.

At the height of Malaysia’s assault on the so-called royal army of the sultan of Sulu, many Indonesians fled their jobs in palm oil plantations in the area.

Yudhoyono said he was also hoping that Brunei, as current Association of Southeast Asian Nations chair, “would take proactive moves to help resolve the problem peacefully.”

“This is a sensitive issue,” he said. “The problem must not be complicated further,” Yudhoyono said. “Therefore we must have the right stance,” he said.

Sulu Sultan Jamalul Kiram III on Monday reacted to President Aquino’s statement at the Philippine Military Academy graduation on Sunday that only negotiations would resolve the Sabah crisis.

“That’s true. Negotiation is the most important thing right now,” Kiram told reporters in his house in Taguig City.

“But until now, there are no negotiations taking place. As I’ve said, my house is open. My door is open to any negotiations,” he said.

Asked if he was willing to speak with Aquino, the ailing 74-year-old Kiram said: “Of course. He’s the President. Who wouldn’t want to meet with the President?”

Kiram said it would be better if the President himself would meet with him so they could directly discuss matters regarding the decision of the members of the “royal sultanate forces” to enter Sabah last month.

“It would be better if we talk directly without any representatives,” he said.

Asked by the Inquirer if he believed in the sincerity of the President in seeking a peaceful end to the crisis, Kiram said: “I don’t know. Don’t ask me that. I think you have to ask the public.”

“The parties to this issue are not only Malaysia and the Philippines, but above all the sultan of Sulu,” he said.

He said a comprehensive resolution to the problem “should not be done unilaterally, speaking for only for one interest.”

Asked to comment on the President’s statement, Idjirani said: “If someone says something, he must mean it.”

Idjirani also disclosed that Kiram may consider lifting his order to the “royal security forces” in Sabah for cessation of hostilities, but said the sultan’s order for a unilateral ceasefire would remain.

“The sultan might consider lifting the order for cessation of hostilities so our men would be able to defend themselves,” he said.

“Negotiations are accepted. But what did they do to the 36 royal security forces members who were intercepted (last week in Tawi-Tawi)? They filed cases. Is this a confidence-building measure? We have doubts on the actions of the government,” Idjirani said.