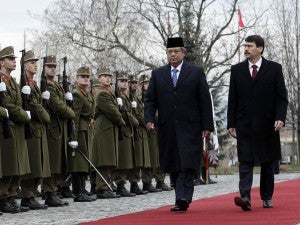 “I hope that the problem in the Malaysian state of Sabah between Malaysian security forces and a group of armed Filipinos could be resolved soon,” Yudhoyono said, according to Antara, which is monitored by the Philippine Daily Inquirer in Davao del Sur.

The Indonesian president said if the Sabah crisis was not resolved soon, he would “pursue a diplomatic approach in the near future, because it’s bad.”

“It does not mean that Indonesia will intervene in Malaysia’s internal affairs, no,” Yudhoyono said.

He expressed concern about the conflict that had claimed more than 60 lives and hoped that the two parties could find a peaceful solution to the problem.

Indonesia once had a territorial dispute with Malaysia over parts of Sarawak and Sabah. The dispute was later settled peacefully.

Indonesia and Malaysia share borders with Brunei in the former North Borneo, with Kalimantan as the Indonesian province nearest Lahad Datu, about 40 kilometers away.

At the height of Malaysia’s assault on the so-called “royal army” of the sultan of Sulu, many Indonesians fled their jobs in palm oil plantations in Lahad Datu.

Yudhoyono said he was also hoping that Brunei, as current Asean chair, “would take pro-active moves to help resolve the problem peacefully.”

“This is a sensitive issue,” he said. “We must not be indifferent to the problem,” he said.

The Sabah crisis was sparked by the sultanate of Sulu’s long standing claim on the territory, which was ceded to it by the Sultan of Brunei in the late 1800s.

When Malaysia gained independence from the British in 1962, Sabah–which was then overseen by the North Borneo British Co.–was annexed into the newly formed Malayan Federation.

The sultanate of Sulu has delegated its claim to Sabah to the Philippine government, which had not formally dropped its interest on the oil-rich territory.

“The problem must not be complicated further,” Yudhoyono said. “Therefore we must have the right stance,” he said, addressing Brunei.