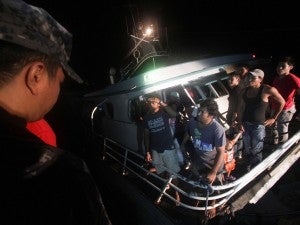 MANILA, Philippines—Some 31 evacuees from Sandakan, Malaysia who fled to Bongao, Tawi-Tawi sought the help of the Public Attorneys’ Office to help their relatives who were detained by Malaysian authorities in Sabah.

In a letter dated March 14, 2013 to Public Attorneys’ Office Chief Persida Rueda Acosta, they said their relatives were detained by Malaysian authorities and their passports were torn apart by the authorities.

“We are among the 523 Filipino evacuees who arrived here in Bongao, Tawi-Tawi on March 13, 2013 from Sandakan, Sabah via Taganak, Turtle Island, Tawi-Tawi. We would like to seek your assistance on behalf of our relatives and kababayan who were left in Sabah without Philippine passports or travel documents,” the letter stated.