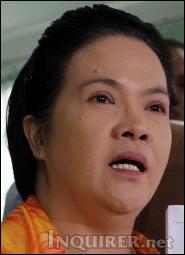 MANILA, Philippines–Fearing further alleged abuses that might be committed by Malaysian authorities against evacuees from Sabah, a daughter of the Sultan of Sulu Jamalul Kiram III has asked the help of the Public Attorney’s Office to assist Filipinos who were prevented from leaving.

PAO chief Persida Acosta told the Philippine Daily Inquirer that Princess Carolyn Kiram, who sought her agency’s help in behalf of the Sultan of Sulu, aired the concern of 31 of 523 Sabah evacuees who were apprehensive over their relatives’ plight in the hands of Malaysian authorities.

“I am going to Tawi-Tawi to personally see them (evacuees) and I have brought a medical team to examine them,” Acosta, who was at a stopover in Zamboanga, said in a phone interview Sunday, assuring that the PAO will look into the matter.

“They are asking for the government’s help and I am going there (Tawi-Tawi) to see what legal assistance my agency can offer,” she told the Inquirer, adding that she has informed Foreign Affairs Secretary Albert Del Rosario and Justice Secretary Leila De Lima of the request of the 31 evacuees for their detained relatives’ release from the Malaysian deportation jails and subsequent repatriation.

In a handwritten March 13 letter, signed by 31 of the evacuees and forwarded by Carolyn Kiram through the local PAO office to Acosta, the petitioners said: “Undersigned are among the 523 Filipino evacuees who arrived here in Bongao, Tawi-Tawi on March 13, 2013 from Sandakan, Sabah last March 8, 2013 via Taganak Turtle Islands, Tawi-Tawi, would like to seek your assistance in behalf of our relatives and ‘kababayan’ who were left in Sabah without Philippine passports or travel documents.”

The evacuees said, “… [W]e are asking for your assistance with the hope that those who were willing and eager to return to the Philippines without Philippine passports or travel documents but [were] arrested by Malaysian authorities, or are still staying at the Malaysian deportation jails will be released and deported immediately to the Philippines as we fear that they might suffer more from the maltreatment or abuses of some Malaysian authorities while they are in said jails.”

In her March 14 letter to Acosta, Carolyn Kiram wrote: “In behalf of the Sultan of Sulu, Sultan Jamalul Kiram III, may we request legal assistance from your office to conduct investigation on the current issues regarding the evacuees coming from Sabah who had been maltreated by the Malaysian police forces which is a human rights violation.”