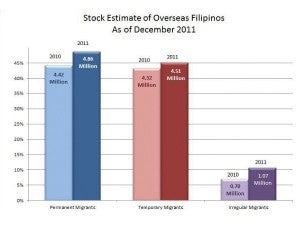 Not every Filipino who leaves the country is an overseas Filipino worker (OFW). The Commission on Filipinos Overseas (CFO) estimates that, as of 2011, 10.44 million Philippine-born Filipinos are residing or working overseas.

But the aggregate from data of the CFO, Philippine Overseas Employment Administration (POEA) and the Department of Foreign Affairs (DFA), shows permanent migrants exceed, by a small but significant margin, OFWs.

Permanent migrants include immigrants, dual citizenship holders or legal permanent residents abroad, whose stay does not depend on work contracts.

Temporary migrants are those working abroad and are expected to return to the Philippines at the end of their contracts.  Although most temporary migrants are OFWs, some of them are students, trainees, entrepreneurs, businessmen and their dependents who are overseas for at least six months.

The POEA and Overseas Workers Welfare Administration (OWWA) regulate the recruitment of OFWs and provide necessary welfare support to returning workers, including victims of recruitment violations and work-related accidents and others in need of emergency relief assistance.

Filipinos who are not properly documented, without valid residence or work permits, or are overstaying in a foreign country—known as TnTs (tago nang tago)—are irregular migrants.

Overseas Filipinos remitted $21.6 billion last year, according to the Bangko Sentral ng Pilipinas, and are a constant source of income for the Philippines.

The CFO stock estimate provides a good snapshot of the number of Filipinos overseas at any given time, taking into consideration migrant flows.

It also clearly shows that, although the Philippines is internationally recognized for its vast and diverse human resources, providing more than 200 countries and territories with Filipino skills and talents, it has gone beyond supplying labor. 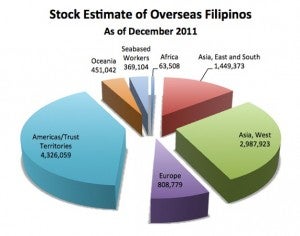 Many Filipinos leave for reasons other than work. They range from marriage to family reunification, from educational and business opportunities to professional advancement.

Permanent residents and dual citizens can petition relatives in the Philippines. And, with countries such as the United States, Canada, Australia and most of Europe, promoting family reunification, the number of non-OFWs leaving the country is expected to increase over time.

In countries such as Singapore and Saudi Arabia, skilled migrant workers may bring along family members as part of a company’s remuneration package.

An increasing number of OFWs from the Middle East are applying for permanent skilled worker visas in countries such as Canada and Australia.

Japan’s policy to issue visas to Nikkei-jins and their families has contributed to the rising number of Filipinos in the country despite the ban on the deployment of entertainers since 2005. Nikkei-jin refers to Japanese emigrants and their descendants who have established families and communities in host countries such as the Philippines.

Understanding the stock estimate of overseas Filipinos will help the government and the private sector choose where to focus their attention.

For instance, is the DFA justified in its choice of which 11 foreign consulates to close? Can the government bring home all OFWs in case of another unrest in Algeria?

Or, if the European economic crisis continues, how many Filipinos and their families would be affected?

The numbers are also important for service providers such as remittance companies and banks and even local governments, which will  have to plan for the return of OFWs.

Cherry Joy Veniles has more than 10 years experience in Filipino migration and is the outgoing head of the Policy Planning and Research Division of the Commission on Filipinos Overseas.