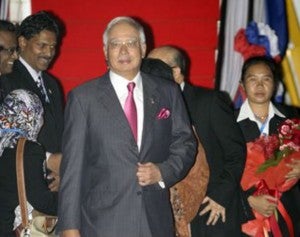 DIGOS CITY, Philippines—Malaysian Prime Minister Najib Razak has defended his government’s military assault on a group of armed men belonging to the “royal army” of the sultanate of Sulu and other action to cut off support for the “invaders of Sabah” from local people and immigrants, the Malaysian state-run Radio 24 reported Saturday.

The radio reported Najib as telling supporters during a lunch he hosted after attending Friday prayers in Tanah Merah in Kelantan  that nobody should question Malaysia’s handling of the Sabah incident because it did not violate international or religious laws.

“Malaysia was on the side of the truth in defending the country’s sovereignty from the terrorists. The government is most careful in the matter and about what we are doing,” Najib was quoted as saying.

He said that under any Islamic law, Malaysia was not liable because it repeatedly gave the “terrorists” an opportunity to get out of Sabah without harm. Nothing in  international law could prevent Malaysia from defending its territory, he added, according to the radio report, monitored via shortwave radio in Digos City.

“We did not want bloodshed, we did not want lives lost but we were attacked and we had to defend ourselves,” he was quoted as further telling supporters.

Najib said earlier that Malaysia will prosecute people who belittle the government’s efforts to curb the violence regardless of their political affiliations.

But the opposition party, Parti Keadilan Rakyat (PKR), led by Anwar Ibrahim, said Najib and the dominant political party, the United Malays National Organization (Umno), was only trying to find an excuse to stifle the opposition.

On Friday, the PKR said the crackdown had intensified.

The PKR propaganda organization, Suara Keadilan, supported the statement and reported on its website that police raided its office near Kuala Lumpur.

Suara Keadilan,  which also operates a radio station, said  policemen from Johor Baru had threatened to confiscate its computers because they were allegedly “used to upload” a “seditious” statement issued by PKR vice president Tian Chua that Umno was “behind the Lahad Datu intrusion.”

Suara Keadilan said its staff  prevented the policemen from taking any computer away by telling them to contact lawyer Latheefa Koya before doing so.

The opposition’s information group said the policemen then sought its reporter  who had interviewed Tian over the alleged Umno links to the Sabah crisis.

On Thursday, Tian was  formally charged for his “seditious statement” at the Sessions Court in Kuala Lumpur.

Tian denied he had accused Umno of plotting the Sabah invasion, as reports had it, supposedly to divert  attention and intimidate Sabahans into supporting the Barisan Nasional, the national political coalition that Umno heads, during the July general elections.

He also denied accusations he had insinuated that Umno politicians had conspired to stage the Sabah “drama” to steer the voters’ attention from the controversial issuance of identity cards to foreigners in Sabah.

Many foreigners, including Filipinos, have acquired Mykad—IDs issued to Malaysian citizens and permanent residents— due to the support of Malaysian politicians, including then Prime Minister Mahathir Mohamad.

In a statement published by Suara Keadilan, Tian described the charge as “politically motivated” and added he was ready to face “this slander to clear my name.”

If found guilty, the opposition leader could spend up to three years in jail aside from a maximum fine of RM5,000 (about P65,000). Tian had to shell out RM5,000 for bail as Judge Mohamad Sekeri Mamat would not hand him over to his lawyer on a mere custodial guarantee, Suara Keadilan said.