LAHAD DATU, Sabah, Malaysia—Eight Filipino men were arrested shortly after midnight Thursday in Sungai Bilis village in Felda Sahabat where they were caught carrying 300 water gallons and almost half a million pesos in cash. 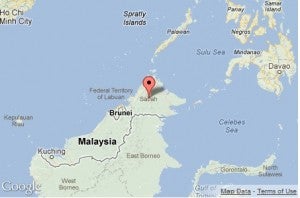 At a press conference, Hamza said the men, ages 17 to 29, were arrested around 12:15 a.m. after they arrived on a speedboat.

The Philippine government has not been granted access to the nearly 100 Filipinos arrested recently on suspicion that they were abetting the group of Rajah Mudah Agbimuddin Kiram.

Hamza said the death toll on the part of Kiram’s group was now 61, following the discovery of 15 more bodies in the village of Tanduo.

The bodies were dug up from three graves near the first graves that Malaysian authorities discovered.

A total of 27 bodies have been taken out of the areas of operations, Hamza said.

He also estimated that there could be 10 more bodies to be retrieved in the village of Tanjung Batu.

Hamza said that following a post mortem on the bodies of the alleged Sulu fighters, Malaysia would “call the Philippine authorities” to ask it they would want to collect the bodies.

If there is no response within three days from the Philippines, the Malaysian government would bury the dead according to their religious rites.

Asked if Agbimuddin remained in the areas of operation, Hamza said there were conflicting reports on the whereabouts of the leader of the sultanate’s Royal Army.