Cuisia urges FilAms anew to lobby for passage of SAVE Act 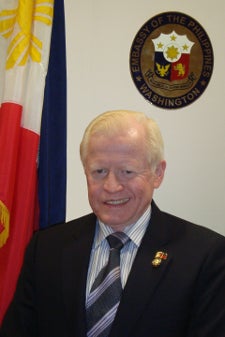 Thousands of Filipino Americans go back to their motherland year after year bringing their investments, talents, vision, mission and everything else to bring relief to their embattled kababayans. However, there’s one mission the new Philippine Ambassador to the US, Jose L. Cuisia, Jr., is requesting Filipino Americans to work for that will bring tremendous economic assistance to thousands of Filipinos as well as Americans, and this time there’s no need to travel 9,000 miles over the Pacific Ocean. You can do your mission right in your living room.

Ambassador Cuisia recently reiterated the importance of the SAVE Act and once again reminds Filipino Americans to call their state senators and congressmen to vote for the bill. While there are many supporters in the senate and congress, he cannot emphasize enough the impact of constituents contacting their legislators and advocate for this bill. Cuisia said that the “US Congress have told us that the voice of the Filipino-American communities is crucial for the bill’s success.”

Cuisia calls for sustained cooperation until the bill becomes law.

SAVE Act would allow Philippine made apparel using fabrics from the US to enter the US duty free. For the US, this bill would expand US export of fabrics to Asian markets and would generate export income for American textile manufacturers. It would lead to thousand of jobs in the US textile sector.

For the Philippines, it would help revive the garments industry and generate jobs for unemployed Filipino workers. The Philippine garments sector has suffered greatly since the lifting of the US apparel quota system and the resulting dominance of China in the US market. “We have lost over 400,000 jobs since 2006,” Said Cuisia.

SAVE Act is very important to Filipino workers and in strengthening relationship with the United States. In September 2010 during his visit to the US, no less than President Benigno S. Aquino III spoke for the SAVE Act and urged that the Filipino American community work together to get it passed. Congressman Manny Pacquiao visited Washington DC earlier this year to seek the support of US legislators.

SAVE Act was re-introduced in the US Senate (S.1244) last June by Senators Daniel Inouye (D-HI) and Roy Blunt (R_MO) with Senators Harry Reid (D-NV) and Daniel Akaka (D-HI) as original co-sponsors: and in the U.S. House of Representative (H.R. 2387) last June 24 by Representatives Jim McDermott (D-WA) and Brian Bilbray (R-CA) with Representatives Steve Austria (R-OH), Bob Filner (D-CA), Mazie Hirono (D-HI) and Gregorio Sablan (D-MP) as original co-sponsors. More US Sponsors and congressmen have realized the value of this bill, but still the voice of the Filipino American community is a vital support to urge them to be co-sponsors.

The current 112th US Congress—window of opportunity for having SAVE enacted.

Ambassador Cuisia, appeals to Filipino Americans’ active involvement in pushing for the bill’s passage by letting senators and congressmen know that they feel strongly about the bill by sending them petition letters through the www.SaveOurIndustriesAct.org, as well as spreading the news and campaigning for the SAVE Act with fellow kababayans in the US.

In the spirit of “bayanihan,” let us share a small portion of our time and effort, and be part of this noble cause for our beloved country, Ambassador Cuisia, implores  the Filipino American community.