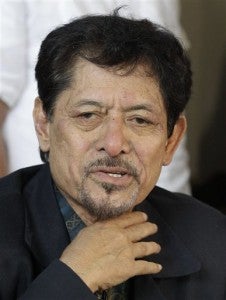 Misuari, along with former National Security Adviser Norberto Gonzales, Pastor Boy Saycon and Sulu Sultan Jamalul Kiram III and his family have been summoned by the NBI.

The NBI, along with the Philippine National Police, is determining possible liability of the Kirams for sending their “royal army” to Sabah. The NBI is also identifying alleged financiers and conspirators of the Kiram family.

Misuari already said he cannot go to Manila because he is busy preparing for the 45th anniversary of the Moro National Liberation Front (MNLF).

NBI deputy director Reynaldo Esmeralda said it is important that the NBI talk to Misuari.

The NBI had already sent subpoena to the MNLF chair.