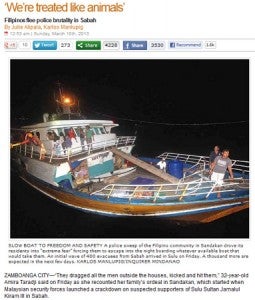 DIGOS CITY — Putrajaya has decided to bar Filipino journalists from entering Sabah to report on developments in Lahad Datu, Malaysian Defense Minister Ahmad Zahid Hamidi was reported to have announced on Tuesday.

In a broadcast by a Sabah-based radio station, Ahmad allegedly told journalists in Kuala Lumpur that the decision was made to prevent “misreporting” of the situation.

He said Putrajaya did not want Filipino journalists to “spin” stories that could only “strain relations between” Putrajaya and Manila.

It was not clear, however, what the Malaysian government intended to do with Filipino journalists already in Sabah before the ban.

Philippine media, in particular the Philippine Daily Inquirer, the newspaper and member of the Inquirer Group of Companies, earned Putrajaya’s ire for allegedly reporting “baseless allegations” that Malaysian security forces had been brutal in handling Filipinos in Sabah as they flushed out local support for the so-called Sulu “royal army.” INQUIRER.net is the news website and a member of the IGC.

Among the claims by fleeing Filipinos was that Malaysian security forces had ordered some men to run as fast as they could before shooting them to death.