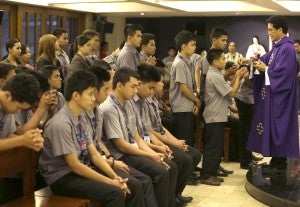 Roman Catholic devotees receive Holy Communion during a Mass at the start of the prayer vigil Tuesday, March 12, 2013 at the Manila Archbishop chapel in Manila, Philippines, to coincide with the conclave at the Vatican to select a new Pope. AP PHOTO/BULLIT MARQUEZ

MANILA, Philippines—On the eve of the papal conclave, Catholics rooting for Manila Archbishop Luis Antonio Cardinal Tagle got an unexpected boost with the release of the Italian translation of his 8-year-old book intended to re-ignite the “value of community in a divided world.”

Tagle’s “Easter People: Living Community,” first published in New York in 2005, was republished in Italy as “Gente di Pasqua” more than a week before the members of the College of Cardinals met at the Sistine Chapel to elect the Church’s 266th Pope.

This has made Tagle’s theology and vision for the Church more accessible to Italians, who have yet to see a “home-grown” pontiff since the brief papacy of Pope John Paul I (Albino Luciani) in 1978.

Archbishop Emeritus Oscar Cruz of Lingayen-Dagupan welcomed the Italian translation of Tagle’s work but preferred not to associate it with the cardinal’s chances of becoming the next Pope.

“I don’t know if that would contribute to his being better known by the cardinal-electors. I think it’s too late for that,” Cruz said by phone on Tuesday. “But I think it’s good because more Italians will get to know him more through the book. He’s a very good theologian.”

Cruz acknowledged the popularity of Tagle among Vatican watchers and within the Roman Curia and fellow cardinals.

A check with Amazon.com showed the American edition of Tagle’s “Easter People” was temporarily out of stock.

The Italian translation drew a rave review from the Vatican Insider website, which described Tagle as a “popular theologian and lecturer” and “highly esteemed” by Benedict XVI.

In the book, Tagle invites the faithful to focus on Easter as a “great season of hope,” an “essential element of community,” which is likewise “a powerful sign of hope to a shattered world.”

“We live in a time and in a world where signs of despair abound,” he writes. “Our life is marked by fragmentation, exclusion, violence and destruction in families, neighborhoods, nations and the whole world. Women and men of our time therefore yearn for true communities where they can experience peace and wholeness.”

Tagle says: “The Easter event, Jesus’ triumph over sin and death, gives us a new lease on life. We hope that as an Easter people we can share the light of Easter to dispel the darkness of alienation that has covered the world.”

As a “gift,” faith is “our response of commitment to a new life with (the Risen Lord) as we remember Him through the Word He speaks and the bread He breaks,” he says.

As the cardinals met in the Vatican, Catholic youth groups and Marian devotees in Manila called on Catholics to pray for the conclave.

YouthPinoy, a youth group promoting online evangelization under the Catholic Bishops’ Conference of the Philippines (CBCP), said its members would hold a daily prayer vigil—from 5 p.m. until midnight—at the Arzobispado de Manila Chapel in Intramuros, Manila.

“(The Mass will) be followed by an hourly vigil until midnight and every night thereafter, from 5 p.m. to midnight, until a new Pope is proclaimed,” the group said in a statement.

Lay leaders of the National Movement for Mary Mediatrix of All Grace, composed of groups promoting devotion to the Virgin Mary, also called for prayers.

“In humble supplication to Mary, we beg for an overflow from the abundance of the graces of the Mater Ecclesiae for the Universal Church during these days of waiting and anticipation,” it said.