Freed PH peacekeepers to return to their posts 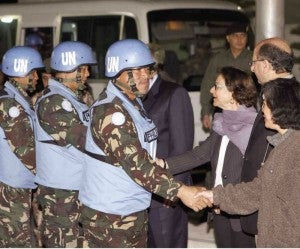 FREE AT LAST Freed by Syrian rebels, 21 Filipino United Nations peacekeepers are welcomed in Amman, Jordan, by Philippine Ambassador Olivia Palala (right) and Jordanian officials. The Filipinos were monitoring a ceasefire between Israel and Syria when they were taken captive. AP

The Philippines remains committed to deploying troops in UN peacekeeping hot spots despite the brief hostage-taking of 21 Filipino soldiers, who were welcomed back to freedom in Jordan with a traditional military feast, officials said Sunday.

The unarmed Filipino peacekeepers, who were riding on trucks, were abducted after providing water and food to other troops on Wednesday in southern Syria near the Israeli-occupied Golan Heights by one of the rebel groups fighting Syrian President Bashar Assad’s regime.

After negotiations, the peacekeepers were freed on Saturday on Jordan’s border and taken to a hotel in Amman, Philippine officials said.

At the Amman hotel, the peacekeepers, who were treated well by the rebels, were welcomed with a “boodle fight”—a Philippine military mess-hall style of eating, where food is laid usually on banana leaves atop a long table and soldiers eat with their hands, said Army Col. Roberto Arcan, who heads the military’s peacekeeping operations center in Manila.

Arcan said he talked on the phone with one of the freed peacekeepers, Army Maj. Dominador Valerio, who remained in high spirits despite the four-day ordeal.

“Please tell my wife I’m OK,” Arcan quoted Valerio as saying, adding he relayed the good news to the Army officer’s wife in the Philippines.

Raul Hernandez, spokesman for the Department of Foreign Affairs, said Sunday the initial plan for the peacekeepers was for them to stay in Jordan for two days before they return to the Golan Heights.

Prior to last week’s hostage-taking, a Filipino Army major and his driver were briefly held at a checkpoint in the Golan Heights by anti-Assad forces in January but were released after about four hours, Arcan said.

The freed peacekeepers from a 326-member Filipino contingent in the Golan Heights are part of a UN mission known as the UN Disengagement Observer Force (Undof) that was set up to monitor a ceasefire in 1974, seven years after Israel captured the plateau and a year after it pushed back Syrian troops trying to recapture the territory.

The truce’s stability has been shaken in recent months, as Syrian mortar shells have hit the Israeli-controlled Golan Heights, sparking worries among Israeli officials that the violence may prompt Undof to end its mission.

On Friday, UN spokesman Martin Nesirky said “the mission in the Golan needs to review its security arrangements, and it has been doing that.”

Asked if the incident would prompt the Philippines to withdraw its peacekeeping personnel, military spokesman Col. Arnulfo Burgos said the Filipino deployments would continue although assessments would be made to better safeguard the peacekeepers in increasingly hostile areas.

“This is a global commitment,” Burgos said in a news conference in Manila.

The President said last week he had asked the military to assess whether large numbers of Filipino peacekeepers should be reduced to help address the country’s growing security needs.

“There is a delicate balance,” Aquino said. “All of these deployments have a vital function. We are part of a global community. If there’s peace in the Middle East, it also helps us.”

But he asked: “Can we afford to send this number of people?”

Army spokesman Col. Randolph Cabangbang said the families of the soldiers had all been informed of their release and were grateful to everyone who helped.

“We updated them. During the first calls, many of them cried, especially the parents, as they were thanking us for the news,” he said.

The abduction and the tortured negotiations that ended on Saturday highlighted the disorganization of the rebel movement, which has hindered its ability to fight Assad and complicates vows by the United States and others to provide assistance.

It has also raised concerns about the future of UN operations in the area.

Activists associated with the group, the Yarmouk Martyrs Brigade, gave different reasons for seizing the 21 men.

First, they demanded that all government forces leave the area. Then they suggested the peacekeepers were human shields against government attacks. Then they declared them “honored guests” held for their own safety.

They also released videos online, including one on Saturday of a bearded rebel commander with his arms around two peacekeepers’ shoulders, flashing a V for victory sign.

On Saturday, after negotiations that the top UN official in Damascus described as “long and difficult,” the rebels changed the plan to deliver the peacekeepers to a UN team, instead taking them to the Jordanian border.

UN Secretary General Ban Ki-moon welcomed their release and called on all parties in Syria to respect the peacekeepers’ freedom of movement.

It was the first time in nearly two years of violence in Syria that UN personnel had been directly caught up in the civil war, which evolved from an uprising against Assad that broke out in March 2011 and had left more than 70,000 people dead.

Since then, hundreds of independent rebel groups have formed across the country to fight Assad’s forces, overrunning military bases and seizing territory in northern and eastern Syria, while the regime maintains its grip in the center and the capital, Damascus.

Although some groups have banded together into organized brigades, most still operate independently, competing with each other for resources and booty from captured sites.

This lack of a central command has hindered rebel efforts against government forces and discouraged the United States and others from providing arms.

The release of the 21 peacekeepers serves as a case study in rebel disorganization.

As the days passed and the captors’ terms changed, international indignation rose.

A spokesperson of the US Department of State, Victoria Nuland, blasted the Syrian government on Friday for shelling the area, while also warning the rebels that the kidnapping was “not good for their reputation and that they need to immediately release these people.”

The men were held in the village of Jamlah, less than 2 kilometers from the Jordanian border.

A UN team tried to retrieve the hostages on Friday, but abandoned the plan because of government shelling.

On Saturday, another UN team reached the area and stopped in a village a kilometer away to wait for the captives, said Mokhtar Lamani, the UN-Arab League envoy to Syria.

Lamani said the team was “surprised” when the rebels issued a “very urgent request” that the team come to the village itself.

The team demurred, Lamani said, then was “surprised” again when rebels took the peacekeepers directly to Jordan.

“We were surprised to hear the news from a satellite channel that they had reached Jordan,” he said. “Praise God in the end that all of them were released safely.”—Reports from AP, AFP, TJ Burgonio, Marlon Ramos and Christine O. Avendaño